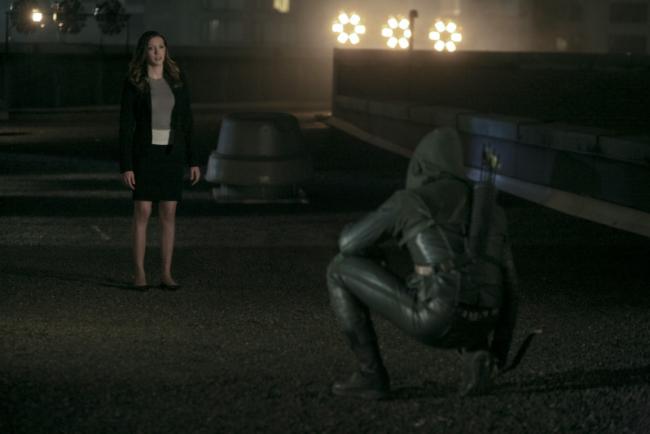 Wow. With this week’s episode, I was shocked once again by how fast things are progressing on Arrow. I love that the writers are letting this show’s characters be intelligent, and are using that to drive the plot. A procedural drama this is not.

I’ll admit that a few moments of this episode made me wince. The opening had both an extended intro and previously on section that felt way too long (though that is a good way for anyone who hadn’t seen the first three episodes to get caught up – I just hope they don’t feel the need to do that every episode). A few too-grandiose statements are made by both Oliver and Laurel that don’t fit the scenes or the characters. Laurel seems to buy Arrow as a good guy way too fast (and then change her mind just as suddenly).

During the scene where Arrow drops off the info about the supervisor lying, and Laurel is making another cringe-worthy statement, I checked to see how much time I had left – and realized the episode was only halfway through. And therein lies this show’s brilliance. They were making me think the whole point of the episode was to get Laurel to appreciate Arrow, when that was only the setup for the real meat of the episode – how killing changes you, and changes others’ perception of you.

I loved that Laurel got some scenes with Oliver-as-Arrow in “An Innocent Man.” I was ready for her to recognize him at any moment, though I knew it wasn’t likely for another character to find out who he was so soon after the reveal to Diggle. Even so, when her eyes widened in shock after stopping him from killing the man who had attacked her, I thought for sure she realized it was Oliver. Instead, she’d only seen the coldness in his eyes, ruining whatever good opinion of him she’d previously had.

The main plot of this episode was a little tenuous, but took some cool turns. Oliver seemed to believe Peter Declan’s innocence a little too quickly. Not every person working for a corporation with an evil CEO who dies under suspicious circumstances was killed by order of the evil CEO (no matter how often it happens on TV shows). But with the time crunch, maybe Oliver just went with his gut.

I truly thought the judge would stay the execution after the new evidence showed up, but perhaps it was too peripheral, or the evil CEO bribed the judge. Staging a prison riot was an interesting way of getting rid an annoying lawyer. A guard uniform and a ski mask were almost laughable with the bow and arrows, but at least Oliver didn’t have to keep turning his head to keep Laurel from seeing his face.

In addition to the main plot of saving Peter’s life (and later Laurel’s too), there were tons of other things going on in this episode. Thea was actually likable after being such a brat last episode (seems switch back and forth in every episode with her). I love her directness with her brother, the fact that he took her advice, and her glee over him actually smiling. Plus, her saying, “I got mad relationship skills, bro” was just about perfect. She’s shaping up to be this show’s Claudia (Warehouse 13).

Mama Queen is still being evil, meeting with one of her cohorts, who is played by John Barrowman (I haven’t seen Torchwood, but fans seemed pretty excited about this, so I figured I’d mention it!). He’s figured out that Arrow is taking down everyone on the list. Meanwhile, Walter is suspicious of missing millions in an account and Moira’s explanation for it, so he asks Felicity to look into it (she hilariously believes she’s getting fired) and that leads him to a warehouse hiding the destroyed yacht.

Diggle reacts to Oliver’s reveal of himself as Arrow by attacking the man who just saved his life. Oliver tries to explain what he’s doing, but Dig calls him a criminal and a murderer (and in the next scene, Laurel yells at him too. Not Oliver’s best day). He resigns as Oliver’s bodyguard, but Oliver shows up at his sister-in-law’s restaurant to share a few more details: the list his father gave him, the fact that his father shot himself to keep Oliver alive, and that he just took out his brother’s murderer. (Bonus: the replacement bodyguard is humorously inept.) Dig decides to join Oliver on his mission, but not as a sidekick, more of a moral compass and support (perhaps the Tuck to Ollie’s Robin Hood?).

Quentin Lance didn’t get many scenes in this episode, but they’re doozies. He gives Laurel some details about the case, and when one of those details is used by Arrow for the first attempt at delaying the execution, he confronts Laurel about helping a criminal. After Laurel gets out of the prison, she shares with her dad the lack of remorse she saw in Arrow’s eyes, and how it confirmed what her dad had been trying to tell her: the hooded vigilante isn’t a do-gooder, but a stone cold killer. Oliver’s face as he heard the conversation from a nearby roof almost made me cry.

Laurel mentions the new getup Arrow was sporting, and that gives Quentin an idea. He combs through the footage of last episode’s shooting, looking not just for Arrow, but anything out of the ordinary – and spots Oliver Queen running up stairs and grabbing stuff out of a trash can. Just as Dig joins Oliver’s cause, the police arrive and arrest the castaway on suspicion of being Arrow.

That ending completely blew me away. I have no idea how Oliver’s going to get out of this mess, but it’s brilliant that the show plans to deal with Oliver and Arrow showing up at the same time right away. It lets the police seem smart, but Oliver gets to show that he’s even smarter. Plus the previews for next week look amazing!

One thought on “Arrow – An Innocent Man”