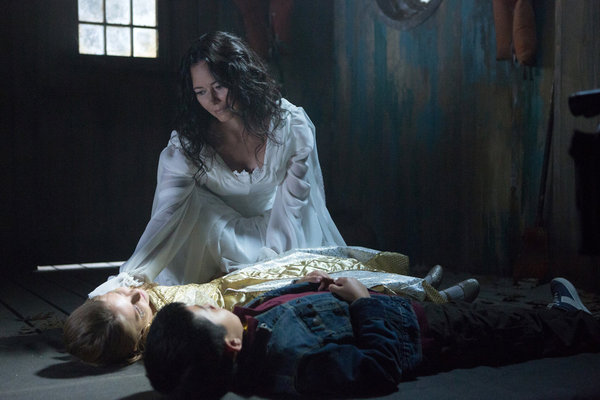 Monroe: “Halloween for us? Come on, that’s, like, bigger than Christmas. There’s a long Wesen tradition of an All Hallows’ Eve midnight Woge – running through the woods, scaring the crap out of villagers. Literally, sometimes.”

This episode of Grimm gets a Hispanic twist as a child abduction points to the legend of “La Llorona” – the woman in white. Valentina Espinosa joins the team as an expert on these serial kidnappings.

The episode opens with a boy and his father about to go fishing. The father hears crying, and notices a woman in white sobbing and walking into the river. He dives in to rescue her, but she disappears, and he looks up to see her walking away with his son. Nick and Hank are called in on the case.

Much of the dialogue in this episode was in Spanish, thanks to the father and most of his neighbors only knowing that language, but few conversations had subtitles. Some scenes, like the opening abduction, conveyed their meaning through action. In others, Juliette (who came to fill in for the station’s vacationing translator) passed along the meaning.

Part of that felt a bit hokey (yes, they wanted to get someone right away, but couldn’t they have borrowed a translator from another district?), but it was an interesting way to let Juliette be more involved in the story, and actor Bitsie Tulloch got to use her Spanish-speaking skills. Filling in also allowed Juliette to meet one of the father’s neighbors, Pilar, who believed the legendary ghost had taken the boy. Pilar notices Juliette’s scar from the cat scratch, and tries to get Juliette to believe in the unbelievable – that her coma and memory loss were caused by the scratch.

Valentina, a Balam (grayish/purple jaguar-like Wesen) in Albuquerque, gets an alert about the abduction and hops on a plane for Portland. She presents herself as a detective who’s been working the case for 5 years. Every year on Halloween, three children go missing and are drowned that night. She thinks the woman who many witnesses have spotted is a serial killer who believes herself to be La Llorona.

A second child is kidnapped, just as Valentina predicted, but Captain Renard has done his homework and found out that Valentina is no longer a police detective – she was let go for her obsession with this case. When Nick and Hank go to bring her in, she reveals her Wesen side, and when she finds out Nick’s a Grimm, she thinks he’s going to kill her. Renard questions her, and she shares why she’s obsessed with the case – her nephew was taken and killed 5 years ago by the same woman.

Nick and Hank do research in the trailer, and find out that even Grimms don’t really know what La Llorona is. There are sightings of her at least 500 years back. Are ghosts part of the world of Grimm? It’s an interesting contrast to the science-based Wesen variation we saw last week. We already have Hexenbiests, which are a little different from typical Wesen, so having a ghost show up wasn’t completely unexpected.

The two detectives take Valentina into their “custody” just as another child is taken, and the three work together to figure out where the woman plans to drown them. They rescue the children, as expected, while La Llorona drifts away.

Poor Monroe has to carry this episode’s B story almost all by himself, but he does an awesome job of it. As indicated by the quote above, he loves Halloween even more than Christmas – decking out his house and his lawn with ghoulish delight. Nick even lets him borrow a mace, which Monroe rigs to a skeleton and uses to repeatedly smash pumpkins, to the delight of trick-or-treaters. Many of the kids know him by name and are delighted to stop by. He stops some bullies from stealing a kid’s candy, and they retaliate by using the mace to smash his front window. But he teaches them a lesson in the end, Wesen-style.

I wasn’t sure whether to love or hate this episode. I think the episode’s TV-PG rating (rather than all the others’ TV-14) gives some hint – it was funny, but for a ghost story, it wasn’t particularly scary (Supernatural’s pilot episode did a much creepier job with the same legend). There was little suspense – you knew they would get to the kids in time, it was already revealed that Valentina was working from home and was a Wesen, and of course Monroe would get a chance to scare the bullies. There was little movement on the overarching story lines (Renard found out Adalind was in Vienna, Renard and Juliette share more awkward glances, and Juliette rejects the idea of unexplainable things) and we got to see Michael Grant Terry being even more awkward as the new intern. Still, I think it was a decent “Halloween special” episode, and being the highest-rated episode since the pilot, it should hopefully provide a good entry point for viewers to get hooked on Grimm.