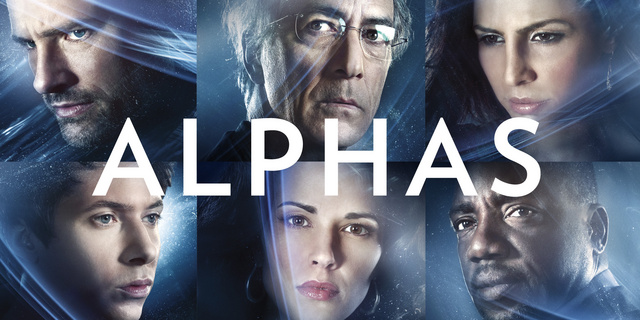 This Monday evening, fans of SyFy’s original shows will be treated to the return of two of their favorites: Warehouse 13 at 9/8c, and Alphas at 10/9c.

Alphas, which won TV Breakroom’s poll for favorite summer show, picks up 8 months after last year’s finale, with the team mostly disbanded. Dr. Rosen has been discredited and held by the government after revealing the existence of Alphas to the public. Check out the below season 2 trailer and episode clip, then keep reading for a list of guest stars and the season 2 poster!

As previously mentioned on this site, Erin Way will be joining the team as Kat, an Alpha who can easily pick up skills but suffers from rapid memory loss. New and returning guest stars scheduled to appear include:

Sean Astin plays Roland, an Alpha who has a bizarrely absorptive brain, which allows him to assume the memories of anyone close to him and then replay them like a tape recorder.

C. Thomas Howell portrays Eli Aquino, an intense Alpha with super-speed who is bent on revenge.

Lauren Holly guests as Senator Charlotte Burton, a government official with mysterious ties to a member of the Alphas team.

Summer Glau reprises her season one role as Skylar Adams, an Alpha who possesses a 200+ IQ and is an electronics mastermind.

Steve Byers plays John Bennett, a new member of the tactical team from the U.S. Department of Defense assigned to the Alphas team.

Kandyse McClure guests as Agnes, an attractive but distant Alpha with the ability to see into people’s minds merely by touching them.

Kathleen Munroe returns as Dr. Rosen’s daughter, Dani, an empath Alpha who can transfer emotions from herself to others and is secretly a follower of Stanton Parish.

Mahershala Ali reprises his role as Nathan Clay the head of a tactical unit within the U.S. Department of Defense tasked with dealing with rogue Alphas.

Noah Reid portrays Adam Gordon a young man grief-stricken by the death of his young sister, Maggie. However, he becomes convinced she is alive and in need of his help.