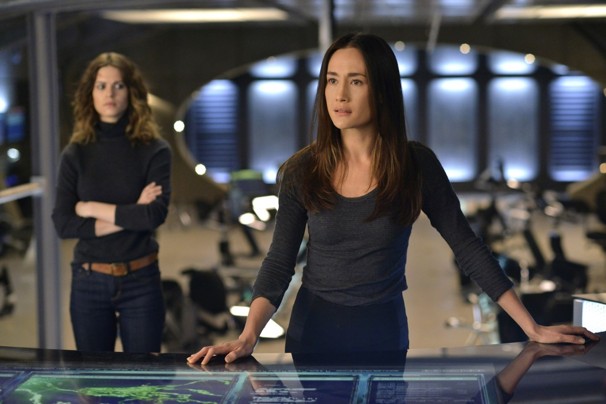 The CW announced series orders for four pilots today, for a total of five new shows (including The Vampire Diaries’ spinoff The Originals) to debut in the 2013-2014 season. The Carrie Diaries was renewed, as well as Nikita, for a shortened season.

Which of these shows will I watch next season? If I have time and the trailers look good, I’ll probably try to check out the pilots for all four new shows. I still need to catch up on The Vampire Diaries to watch the planted pilot for The Originals, but I’m leaning toward not watching the spinoff. Nikita I will watch till the end, and I probably would have at least given a shot to The Carrie Diaries (especially since it includes Doctor Who’s Freema Agyeman) if I had more time when it started airing.

Tomorrow People has an impressive line-up of executive producers (from Chuck, Arrow, The Vampire Diaries, and Nikita) and features genre favorite Mark Pellegrino as well as Robbie Amell (Arrow’s Stephen Amell’s cousin – who will play a character named Stephen). People around the world gaining superpowers isn’t new (see Heroes, Alphas, and more), but can be excellent if done right.

Star-Crossed (formerly Oxygen) has a human girl falling in love with an alien boy after he and 8 other alien teens are integrated into a high school ten years after their people landed on Earth. I’m not familiar with many of the actors, so I’m counting on previews to tell me why this intriguing premise is must-see TV.

The 100 refers to a group of juvenile delinquents who are sent to a nuclear-war-ravaged Earth to see if it’s habitable again. The cast includes a few actors I know from their reoccurring guest spots on other shows. It’s based on an upcoming book series – which I think would be a dream come true: being able to write such a great novel that it’s made into a TV show before it even releases.

Reign focuses on 15-year-old Mary, Queen of Scots, and her closest friends, three of her ladies-in-waiting, amid the secrets of the French court. I usually don’t watch historical shows, but I may give this one a try as it stars Megan Follows (aka Anne Shirley) and Anna Popplewell (aka Queen Susan of Narnia).

Gone are the days of the CW being the teen girl channel. Nearly all of their scripted programming now has a supernatural/sci-fi/action hero bent (4 out of 5 new programs, 5 out of 7 renewed programs), and the remaining ones have distinctive settings (deep South, 80s New York, 16th century France). And out of their 12 scripted shows for next year, I am currently watching four, want to catch up with Supernatural, would have given The Carrie Diaries a try, and will probably watch all five new pilots. That leaves the lone show I care nothing about, Hart of Dixie (ironic since my last name is also Hart), of which I watched the pilot. I didn’t expect to like it, though, since medical shows I like are few and Southern accents bug me.

So next fall, the CW may go from my least-watched channel (the first show I watched was Nikita when it premiered) to the channel with the highest concentration of shows I watch. And with so many genre shows, perhaps it’s more deserving of the Syfy name than the Syfy channel itself!

One thought on “The CW Picks Up Tomorrow People, The 100, Star-Crossed, and Reign, Renews Nikita and The Carrie Diaries”