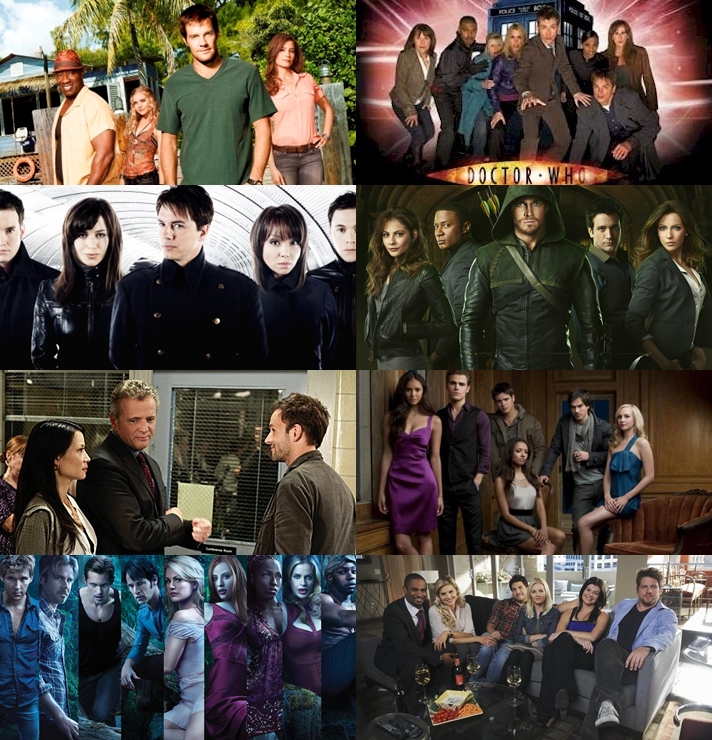 2012 was a great year for me in regard to uncovering awesome TV shows. It may even top 2011, when I got pulled into Buffy the Vampire Slayer, Angel, Bones, Warehouse 13, Eureka, and Veronica Mars, not to mention enjoyed great new fall shows like Once Upon a Time, Grimm, Suburgatory, and Person of Interest.

My top eight new shows for 2012 are also a mix of brand new and new-to-me shows. Like with the list above, this year wasn’t always my first exposure to the shows in question, but 2012 was the year they hooked me. I’m listing the shows in roughly chronological order of getting sucked in.

This short-lived Fox drama (so many awesome shows can say the same thing) caught my attention as a companion show to Bones – not quite a proper spinoff as none of the main characters from Bones joined the new show. But with a planted pilot, same showrunner, and guest appearances by Bones cast, the tie was definitely there. Geoff Stults (as Walter) and Michael Clarke Duncan (as Leo) hit it out of the park on day one, but the ratings didn’t match the show’s awesomeness. Fox also aired the episodes out of order, threw in a month-long hiatus in March, and moved the show to the Friday death slot – starting Easter weekend!

From the beginning, the show felt like it should have been airing on USA Network – it had the same breezy, pop-culture-riddled sensibilities as Psych, and would have been a perfect fit for their “Characters Welcome” brand. But in the end, the cancellation of the show was moot, as Michael Clarke Duncan, who as Leo was the heart of the show, passed away over the summer.

I’m still waiting for the DVD set to become available, but at least The Finder introduced me to the amazingness of actor Geoff Stults, who I’m currently enjoying as a reoccurring cast member on Ben and Kate. Sadly, that show also airs on Fox, and I’ve learned not to get attached to anything airing on that network now.

Buffy and Being Human showed me that shows about vampires are cool. So to feed my bloodlust, I decided to try out this buzzy HBO show, not really expecting to like it – keeping things PG-13 is more my style, and I’m not a fan of the deep south. But checking out episode one led swiftly to two, and three, as each twisty cliffhanger glamoured me into watching more. Short season meant catching up in time for season 5, and while this show is fairly low on my list of vampire TV shows, it’s addicting enough that I’ll keep coming back.

There’s a dearth of good comedy over summers, so I decided to give this recommended show a try in late August, and quickly grew to love the quirky group.

After catching up on True Blood, I decided to try out the last major vampire show currently airing that I hadn’t seen. Plus, I was looking at writing a book with a high school setting and vampires trying to control their urges, and I wanted to make sure it was different enough from this show. The pilot bored me, but I heard later that the rest of the show was a vast improvement, so I dove in during September, and caught up on all three seasons within 3 weeks, just in time for the season 4 premiere.

Like True Blood, the fast-paced storylines made the show insanely addictive, but in this case, the characters and relationships became an even bigger draw. Damon’s struggle with what sort of person to become, Elena’s compassion without weakness, Stefan’s dual nature, Caroline’s ditziness turned to strength, Alaric’s unlikely allies becoming the family he always wanted, and more.

No, it’s not Sherlock, but it doesn’t have to be – I love both shows, and Jonny Lee Miller makes an amazing Holmes. Making Watson female, setting the show in NYC, and coming up with new stories instead of revamping the classics all help differentiate this show. And with us getting only 4 1/2 hours of Sherlock every 18 months or so, there’s plenty of room for a fun, quirky drama like this. I enjoy the recovering addict twist, and Joan Watson’s slower progression to teaming up with her client.

Aside from Alphas, TV has been sorely missing a good superhero show, and in the wake of The Avengers’ popularity, the Batman trilogy’s gritty conclusion, and America’s obsession with bow-toting heroes, Arrow is exactly what was wanted. While there are still a few rough edges on this new drama (dialogue could use some help), great ratings will give it time to truly soar.

I always knew I would eventually watch this show. I purchased digital editions of series 1 and 3 back in 2010, and watched a few episodes here and there, but didn’t get hooked. I watched a couple more earlier this year, and in November started liking the show more and more. In December, I started marathoning through Doctor Who in earnest, as most shows were going on hiatus and I had more time. I rewatched season 1 with my sister (and liked it a whole lot more the second time) around Christmas, and caught up with the whole show (excluding classic Who) a few days after the New Year.

I bought the first two series of Torchwood in 2010 also, and despite some misgivings about the show’s adult content, I liked the character of Jack Harkness from Doctor Who enough to give the show a try (and keep all the crossovers in their proper places). As a result of watching the two together, it’s hard to separate Torchwood as a distinct show in my mind. It’s the only show on this list I’m not current with, as I still have 6 episodes left of the Miracle Day mini-series. It’s definitely a more serious show (during various episodes I found myself longing for the more lighthearted Who), morality is a bit grayer, and quite often there isn’t a happy ending. But it definitely grows on you, and there are quite a few exceptional episodes.

One thought on “Eight TV Fandoms I Embraced in 2012”