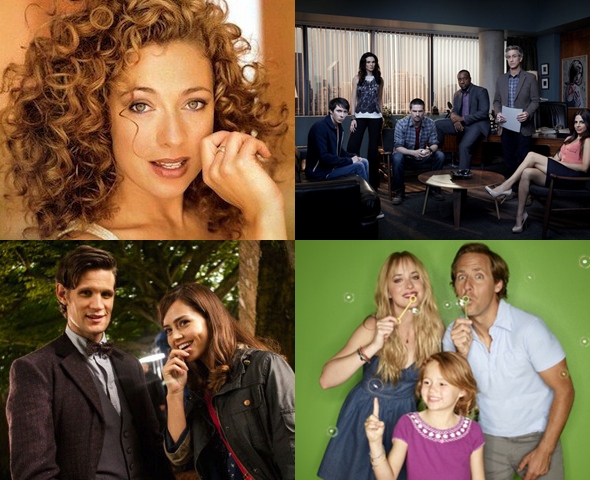 I’ve been very bad about posting updates this month (still luxuriating in the aftermath of my Doctor Who marathon), but here’s some TV news from the month of January!

Doctor Who alum Alex Kingston (River Song) will appear on multiple episodes of Arrow as Laurel Lance’s mother, Dinah. Fans of the Green Arrow comic books know she’s the original Black Canary, so it’s possible she and Oliver Queen may come to blows. Might she also share a scene with fellow Who alum John Barrowman?

Series 7 of Doctor Who resumes March 30th on both BBC1 and BBC America. I’m so glad they’re not making us wait for the episodes after they air in Great Britain!

Bones secured an early renewal for another season, and showrunner Hart Hanson has a pilot order with CBS for an additional show. Unfortunately, the premise doesn’t interest me in the least, but he did amazing with The Finder, so who knows?

Speaking of The Finder, its lead actor Geoff Stults has been reoccurring on Ben and Kate, but FOX has pulled that from the schedule. At least he showed up in the last-episode-before-likely-cancellation-burnoff, though it was in a manner that indicated he won’t return. I really hope Stults finds an awesome pilot this season, though I’m thinking he might want to avoid FOX. I know I’ve become a bit wary of any shows airing on that network. If bubble show The Mindy Project doesn’t make it, I’ll only have two returning shows to watch on FOX this fall: Bones and New Girl.

Don’t Trust the B in Apartment 23 has also been pulled from the schedule, effectively canceling the show, and instead viewers will get a double dose of bubble show Happy Endings. I still don’t know why ABC, FOX, and NBC all scheduled a comedy block for Tuesdays at 9, but clearly, ABC lost that battle. A pity, since I enjoy both shows, but the writing’s been on the wall for a while.

Another blow was the cancellation of Syfy’s Alphas, particularly galling since season two ended with a cliffhanger. One of the best-acted shows around, its powers-with-limitations approach worked very well. I’ll be keeping an eye out for these actors in the future (especially Ryan Cartwright, who led me to the show from Bones). Poor Summer Glau, even reoccurring on a show still brings the curse.

Broadcast networks have ordered a flurry of pilots, but since most of what we know about them is a paragraph description, it’s hard to tell which ones I’ll be checking out if they make it to series. The CW is giving The Selection another go after sending the first pilot back for retooling, and The Vampire Diaries may be getting a spinoff – The Originals (featuring Klaus, Elijah, and Haley from TVD). FOX is looking at Delirium, based on a YA trilogy about a world where love has been eradicated by a special procedure people get at age 18.