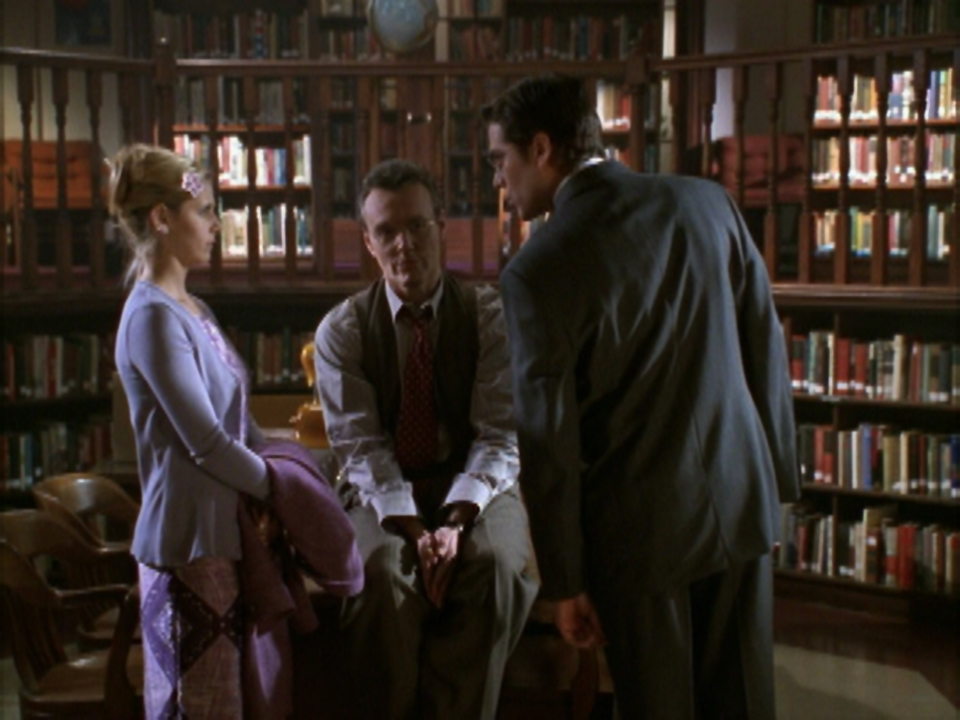 “Bad Girls” is the episode where Buffy taps into Faith’s mantra of  “I’m a Slayer and can do what I want,” with disastrous consequences. Since this is a Buffy-and-Faith episode, Willow and Xander only get a few scenes, and their humor is sorely missed for most of the episode.

Adding some hilarious moments is the introduction of Wesley, Buffy and Faith’s new Watcher (thanks to the Council ousting Giles at the end of “Helpless”).

Wesley:   It’s very nice to meet you.
Buffy:  Is he evil?
Wesley:  Evil?
Buffy:  The last one was evil.
Wesley:  Oh, yes. Gwendolyn Post. We all heard. No. Mr. Giles has checked my credentials rather thoroughly and phoned the Council, but I’m glad to see you’re on the ball as well. A good Slayer is a cautious Slayer.
Buffy:  Is he evil?
Giles:  Not in the strictest sense.

Knowing what he’ll become over on Angel, it’s almost painful to see how dorky and incompetent Wesley is at this point. His scenes with Giles are the best – both polishing their glasses, their overly polite jabs at each other, Wesley cowering in a corner while he sees Giles’ swordplay.

You also get more info on what exactly the Mayor is up to, combined with more of his 1950s mindset and propensity for cleanliness. He opens his cupboard of weapons and spells to retrieve a disposable wipe. He puts his evil plans on his to do list right with his meeting with the PTA.

Mayor Wilkins:  I just love the Family Circus! That P.J., he’s getting to be quite a handful.
Mayor Wilkins:  Well… I haven’t seen anything like this in, uh… Well, a good long while. Where’s the owner of these fine implements?
Trick:  The common term is ‘slain’. But I’ve been seeing this breed around. Are we expecting any trouble?
Mayor Wilkins:  Do you like Family Circus?
Trick:  I like Marmaduke.
Mayor Wilkins:  Oh! Eww! He’s always on the furniture. Unsanitary.
Trick:  Nobody can tell Marmaduke what to do. That’s my kinda dog.
Allan:  I like to read Cathy.

The main villains of this episode are rather boring – vampires with swords and a disgusting, fat demon that is so obviously fake I remember why it took me so long to get into this show. Also, additional side note, rewatching episodes makes it really easy to tell the difference between Sarah Michelle Gellar and the person doing her stunts. 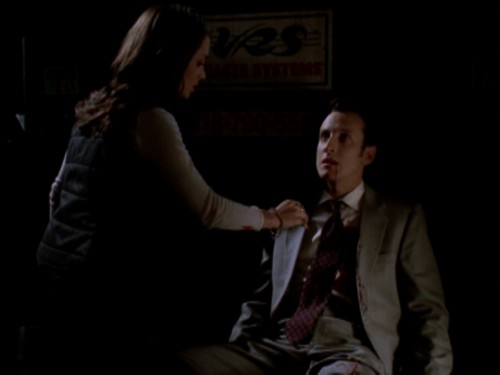 The biggest impact on future episodes (aside from the Mayor becoming invincible), is Faith killing the deputy mayor, Allan, and doing her best not to care about it. Though I wonder why the police didn’t do a better job of trying to find the two girls who escaped custody by crashing a police car. Is Sunnydale really that big that they couldn’t find Buffy, especially after her earlier brushes with the law? Perhaps the crash fuddled their memory.