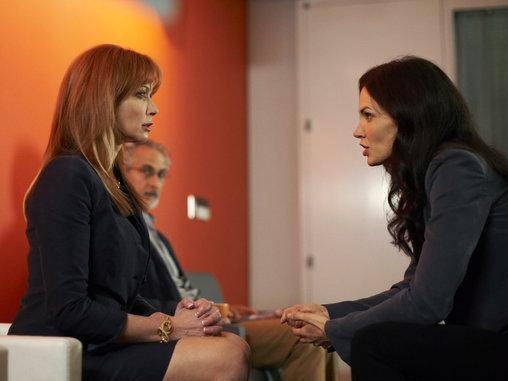 This second season of Alphas has been amazing so far! (Not watching the show yet? Get caught up by entering to win the first season on DVD!) Now, Syfy is airing the show at 8PM on Mondays, as well as its normal 10PM slot, bookending the quirky Warehouse 13.

Syfy has released TWO previews for the August 20th episode, “Gaslight.” In my opinion, the second preview gives a little too much away, so you may want to skip it. (I haven’t seen the episode yet, so it might not be that bad, but in any case, it’s a very odd sort of spoiler.) Update: Not a spoiler at all, just a very delayed memorial service. I wanted to make sure it didn’t mean a character was somehow still alive and then later died in this episode.

Also, Lauren Holly (pictured above, best known for playing NCIS Director Jenny Sheppard) makes her first appearance on the show in this episode, as Senator Charlotte Burton, a government official with mysterious ties to Dr. Rosen.

One more cool thing: Syfy has created a digital lookbook, featuring 8 Alpha abilities. Click on it below for a fullscreen version, complete with video clips.