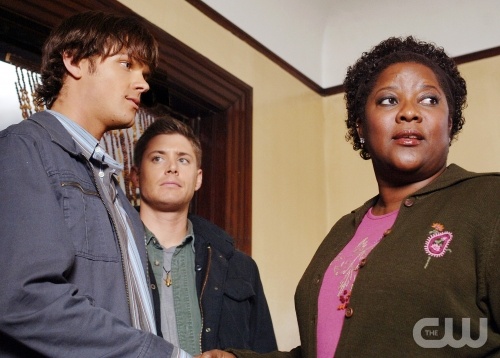 Okay, I’d heard this was a good episode, and it was one of the better ones I’ve seen so far, but as it ended I felt rather ambivalent. What, really, has changed?

This episode, thanks to one of Sam’s prescient dreams, takes the brothers back to Kansas, where a mother and her two young children have just moved into the boys’ childhood home. Early creepy indications include scratching noises and the sighting of a figure wreathed in flames.

Dean and Sam make some inquiries around town and finally meet with a no-nonsense female psychic who knew their father. Missouri’s presence in the episode shows again how hard it is to connect to a show when there are only two main characters. She made a good addition to the team for the episode, and made me wish for a consistent third character to liven up the relationship dynamics.

Okay, after watching this episode and the Heroes pilot, I am going to have a lifelong fear of garbage disposals. The monkey with the cymbals was pretty clichéd, though.

I figured out early on that flame-figure was Mary Winchester, thanks to coming across spoilers while verifying facts for polls. So that part of the episode didn’t have the impact on me that it could have. And seeing Jeffrey Dean Morgan’s name in the credits let me know that good ol’ dad would be showing up at some point – unfortunately it was in a closing scene with Missouri, so no family reunion just yet. Plus his excuse for not seeing his sons seems incredibly lame. There’d better be a good reason for why seeking this “truth” is keeping him apart from his sons when it didn’t for the first 20 years after the fire. Especially after Dean’s phone call to him, which was some of the best acting I’ve seen on this show so far, by Jensen Ackles or anyone else.

And so Dean and Sam faced their fears, went back home, and saved the day – but what do they have to show for it? Yeah, it was cool that they saw their mom, but a) they already knew she was dead, and b) they already were pretty sure she loved them. It’s interesting that we as viewers now know that John Winchester isn’t locked in some hell dimension, but his sons don’t know. So as far as I can see, nothing changes. Maybe I’m just too used to Joss Whedon shows, but after a pivotal episode like that, isn’t something (even if it’s a tiny shift in a relationship or a new fear a character will have to overcome) supposed to be different?

Well, there is the fact that now Dean knows about Sam’s dreams. Would have been nice to touch on that near the end. But I guess I’ll have to see if this episode has much of an impact on later ones.