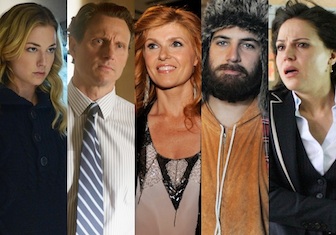 ABC has finally announced its fall 2012 premiere dates, with most shows coming back during the final week of September (starting Monday, September 24 with Castle, and ending Sunday, September 30 with Once Upon a Time at their normal times).

Notable exceptions include Suburgatory (which returns Wednesday, October 17, in a new 9:30 time slot), Happy Endings and Don’t Trust the B—- in Apartment 23 (Tuesday, October 23 at 9 and 9:30 – I wonder if they did that so Apt. 23 would come back on the 23th – great way to get people to remember!), and the network’s two country-music themed offerings, Nashville (October 10) and Malibu Country (November 2).

The only new show I’m planning to check out on ABC this fall is Last Resort (premiering Thursday, September 27, at 8), with a cast that includes Dichen Lachman (Dollhouse), Autumn Reeser (No Ordinary Family), and Scott Speedman (Felicity).