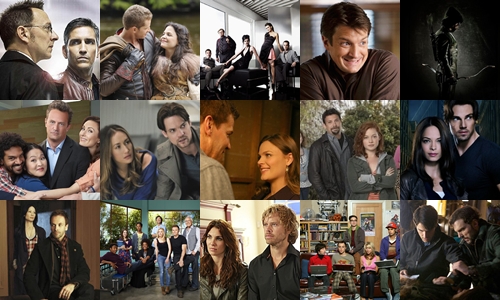 Now that all of the broadcast networks have revealed their fall schedules, as well as trailers or clips of new shows, it’s time to look at what I will be watching live, what I’ll have to catch online, and how many annoying half hour and hour “dead zones” I’ll have between good shows.

TVLine was nice enough to compile a grid chart of what’s airing when, which you can view at the link below (it will open in a new tab so you can follow along):

Thanks to 666 Park Street’s too-much-horror bent, Once Upon a Time remains my only show for Sundays, though if my Sunday evenings stay busy, I’ll be watching online anyway.

Monday has a lot of dead zones. Since I don’t get HD Fox coverage in my area (which makes the picture 2/3 of its normal size), I’ll watch Bones on Hulu and How I Met Your Mother live. But since I’m likely giving up 2 Broke Girls (since it’s become the ladies’ version of Two and a Half Men instead of a smart, funny comedy), I don’t have anything else I plan to watch until Castle at 10. Revolution looks good, but like Smash (which will be back in midseason), I’ll only watch it live if Castle is a repeat or ABC won’t come in.

Tuesday’s first two hours are packed for me. I’ll probably watch NCIS and NCIS: Los Angeles live when I can, because if I have to watch a show online I prefer Hulu to CBS’s video player. But if they’re on repeats or I’m in the mood for comedy, I have choices: Ben & Kate on Fox at 8:30, New Girl on Fox or Go On on NBC at 9, and The Mindy Project on Fox (maybe) or Don’t Trust the B—- in Apt. 23 at 9:30. Nothing on at 10 that interests me, though I might watch the pilot of Vegas out of curiosity.

Wednesday just has two shows I plan to watch, and of course they conflict – Arrow at 8 and Suburgatory at 8:30. I might try out Animal Practice (at 8) if I’m watching Suburgatory live.

Even with Community’s move, Thursdays remain my busiest night. At 8, I have to choose between The Big Bang Theory and a half hour dead zone, or ABC’s Last Resort. At 9, Person of Interest and CW’s Beauty and the Beast will probably push The Office to online-only. My only conflict-free hour will be at 10, with CBS’s Elementary.

Friday, I will probably watch Community and Grimm (NBC, 8:30 and 9) live, and catch Nikita online.

All told, that’s 22-26 shows every week, out of which up to 12 are 1/2 hour comedies. Up to 20 hours total every week for broadcast shows, if I like all the new shows I’m trying out. Seems like a lot, but I guess not really for someone who runs a TV site. 🙂