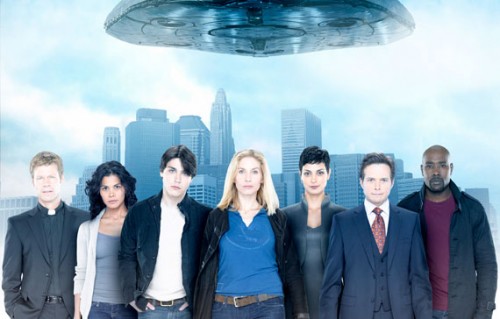 I never watched the original V, but ABC’s two-season remake captured my attention and held it. I tuned in to the show because it starred Morena Baccarin, best known as Inara from Firefly. Having loved her on Firefly, it was eerie to see her as the villain, Anna, in this show. You can almost see the lizard-like creature underneath her skin.

Alan Tudyk (Wash from Firefly) also showed up in the first few episodes as Erica’s partner. Erica Evans, an FBI agent, is the main character of the show, but it took me a while to warm up to her. (I primarily knew the actor, Elizabeth Mitchell, from the Santa Clause movies, so it took a while for that image to fade.)

The premise of the show is that aliens invade the earth as peaceful Visitors (or Vs), claiming to want peace and sharing their technology. But they have a hidden agenda, buried as their lizard appearance is buried under human skin. And they haven’t just arrived – sleeper agents have been in place for decades.

Erica gradually gathers a small band of people who know what the Vs are truly like, and they work to set back their devious plans however they can. But she’s keeping the aliens’ true identity from her son, who’s fascinated by the Vs and eventually begins dating Anna’s daughter Lisa.

The show was excellent – great plot, stunning visuals, and with the exception of a few characters, an awesome cast. But it was canceled after only two short seasons (22 episodes total), so it never had a chance to grow into its true potential. I was especially looking forward to season 3, since they’d just gotten rid of my (and judging from reviews, many others’) least favorite character.

One of my favorite characters was the mercenary Kyle Hobbs, played by Charles Mesure. I’m looking forward to where the actor will go in the future.

While ABC put the first season on Hulu, they didn’t with the second season, which made it hard for viewers to catch up with the closely-connected episodes. I think that’s one significant reason why ratings declined.