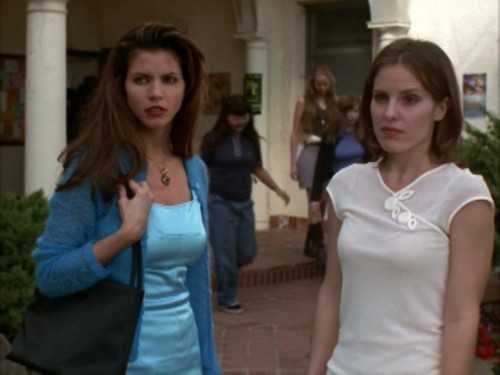 Immediately following Spike’s short visit, Anya enters the world of Buffy the Vampire Slayer. This was only my second time watching “The Wish,” so it was neat to see all of the hints at future episodes. The two that really stuck out to me were Vampire Willow’s “Bored now” and the fact that Buffy was in Cleveland, which we’ll later find out has a Hellmouth of its own.

But the episode begins typically enough, with Buffy fighting a demon (who reminds me a bit of Davy Jones in Pirates of the Caribbean), assisted by Willow and Xander. The three are still dealing with the fallout from “Lovers Walk.”

Buffy:  No luck reaching Cordelia?
Xander:  I’ve left a few messages. Sixty… Seventy… But you know what really bugs me? Okay, we kissed. It was a mistake. But I know that was positively the last time we were ever gonna kiss.
Willow:  Darn tootin’!
Xander:  And they burst in, rescuing us, without even knocking? I mean, this is really all their fault.
Buffy:  Your logic does not resemble our Earth logic.
Xander:  Mine is much more advanced.

Oz needs time to think things through, but Cordelia is cutting up and burning photos and trying to pretend Xander doesn’t exist. Her old friends aren’t welcoming her back, and Cordy soon comes to the conclusion that Buffy being in town is what started the downward trend in her life. The new girl in school is the one bright spot in her week.

Cordelia:  Go ahead. Dazzle me with your oh-so-brilliant insults. Just join the club.
Anya:  Hardly. Uh, actually, I’ve been looking for you. Ever since we met this morning, I was, like, thank God there’s one other person in this town who actually reads W.
Cordelia:  But Harmony…
Anya:  Oh, she follows me around. If that girl had an original thought, her head would explode.

But Anya is really the vengeance demon Anyanka, so when Cordelia wishes Buffy had never come to Sunnydale, Anyanka grants her wish. Cordy is immediately transported into an alternate reality where vampires rule the town. Willow and Xander are both vampires and the Master’s top henchmen; Giles, Oz, and a few others drive around trying to save who they can; and Angel lives chained up and tortured. After Willow and Xander kill Cordelia, it’s up to Giles to figure out what’s going on.

I’m always surprised when I read about people not liking Anya, because I love her! Emma Caulfield does an amazing job playing Anya’s hilarious facets – her cheerful literalness, her fear of bunnies, her delight in money – but adds depth to her character whether the moment is humorous or somber. I’m looking forward to Emma’s new project, “Ripped” as well as her upcoming guest appearance in Leverage. I also just caught up on her mockumentary web series, Bandwagon. It’s finishing up its second season (Oops, which is now it’s first season. The years-ago “first season” is now the movie – which makes sense, with the time gap.) , which boasts the addition of Yvette Nicole Brown (Shirley on Community), and I plan to do a full post on it soon.

It’s neat getting to see the changes in the characters in this episode, all of them still being themselves, but under far different circumstances. Vampire Willow brings out the mad-with-power side of her character, which we’ve seen glimpses of before, but Vampire Xander doesn’t seem to have kept much of his old personality. Giles lacks confidence, Buffy’s jaded, and Angel’s hanging onto the last thread of hope. It’s also pretty interesting watching who kills who in the final battle.