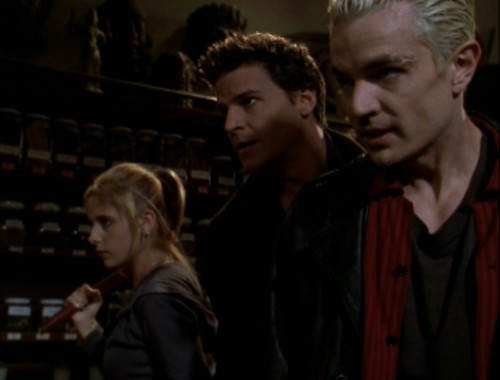 This is one of my favorite episodes of the entire show (I’ve seen it at least 4 times so far this year), and it’s the episode that brought James Marsters back as a regular for season 4 and beyond. “Lovers Walk” is, at its heart, a sad episode for pretty much all of the main characters, but Spike’s role makes it absolutely hilarious.

And it’s not just the major parts of the episode that make it so awesome; it’s the little things, like perfect scene transitions, starting with the very first one. The gang’s discussing SAT scores, when:

Cordelia:  Get out of Sunnydale – that’s a good thing. What kind of moron would ever wanna come back here?

Cut to Spike running over the “Welcome to Sunnydale” sign – again.

The sad part of the episode revolves around Xander and Willow’s continuing feelings for each other, Oz and Cordy finding out, and the havoc that wreaks. Giles is mostly absent, thanks to a retreat.

Buffy:  Okay, but you’re just going for a few days, right? I mean, you’re not gonna settle there and grow crops or anything.
Giles:  What? Oh, my gear. No, no, this is basic necessities.
Buffy:  Giles, you pack like me.
Giles:  Here. I suspect your mother will want to, uh, put it on the refrigerator.
Buffy:  Yeah. She saw these scores, and her head spun around and exploded.
Giles:  I’ve been on the Hellmouth too long. That was metaphorical, yes?

Things are still uncertain with Angel and Buffy, and surprisingly, it’s Spike who brings clarity to their relationship. They can never be “just friends.” This is the only episode on either show where the three of them spend any significant time together.

Spike is heartbroken over Drusilla, leaving him, and wants to share his tale of woe with anyone who will listen:

Spike:  She wouldn’t even kill me. She just left. She didn’t even care enough to cut off my head or set me on fire. I mean, is that too much to ask? You know? Some little sign that she cared? It was that truce with Buffy that did it. Dru said I’d gone soft. Wasn’t demon enough for the likes of her. And I told her it didn’t mean anything, I was thinking of her the whole time, but she didn’t care. So, we got to Brazil, and she was… she was just different. I gave her everything: beautiful jewels, beautiful dresses with beautiful girls in them, but nothing made her happy. And she would flirt! I caught her on a park bench, making out with a chaos demon! Have you ever seen a chaos demon? They’re all slime and antlers. They’re disgusting. She only did it to hurt me. So I said, ‘I’m not putting up with this anymore.’ And she said, ‘Fine!’ And I said, ‘Yeah, I’ve got an unlife, you know!’ And then she said… she said we could still be friends. God, I’m so unhappy!
Willow:  There, there.
Spike:  I mean, friends! How could she be so cruel?

Willow assumes that Spike will kill her and Xander whether she does the love spell for him or not, but I’m not so sure. He was smart enough to use them for leverage so that Buffy wouldn’t kill him – he probably realized that Buffy would hunt him down relentlessly if he did anything to hurt them. I don’t really understand why Spike went to Buffy’s house, unless that’s where Willow said she left the spell book. There’s no mention of him picking it up there, and we know perfectly well that she left it at the school. Willow must have told him that in hopes that Buffy would be there to stop him, but she isn’t. Joyce is home alone. Fortunately, Spike is more in the mood for hot chocolate and sympathy than blood.

Spike:  So I’m strolling through the park, looking for a meal, and I happen to walk by, and she’s making out with the chaos demon! And so I said, ‘You know, I don’t have to put up with this.’ And she said, ‘Fine!’ So I said, ‘Fine, do whatever you like!’ I mean, I thought we were going to make up, you know.
Joyce:  Well, she sounds very unreasonable.
Spike:  She is. She’s out of her mind. That’s what I miss most about her.
Joyce:  Well, Spike, sometimes even when two people seem right for each other, their lives just take different paths. When Buffy’s father and I…
Spike:  No, this is different. Our love was eternal. Literally. You got any of those little marshmallows?

I simply love Spike and Joyce’s interactions. She reminds him of his mother, who he loved even as a vampire. And her confusion is hilarious and understandable – she views Spike, sitting heartbroken in her kitchen, as the good vampire, and Angel, snarling at her door, as the bad one.

That’s another way Spike seems more “human” than Angel – he actually enjoys food and drink other than blood. Alcohol, hot chocolate with marshmallows, cookies, spicy buffalo wings – you name it. He’s also been known to spice up his pig’s blood with various ingredients. I can’t recall one instance of Angel enjoying food when he wasn’t human.

I love Buffy, Spike, and Angel teaming up to fight the vampire gang that the Mayor sent after them. And Spike keeps up his one bad thing/one good thing (for selfish reasons) rhythm from early season two. He killed the shopkeeper, but he also killed a vampire. He might have even killed several if it wasn’t for Buffy’s idea to lob bottles of holy water at the vampires to beat them back. I find it interesting that she warned him – yes, they needed him alive to tell them where Willow and Xander were, but it’s unlikely that the water would have killed him. And once he revealed their location, Buffy didn’t even try to stop him from leaving.

The Mayor is one of my favorite villains on the show – much more enjoyable to watch than the annoying Master or Adam.

Mayor Wilkins:  But I guess we’re past that now. This year is too important to let a loose cannon rock the boat.
Allan:  Should I have Mr. Trick send a… committee to deal with this?
Mayor Wilkins:  Loose cannon. Rock the boat. Is that a mixed metaphor?
Allan:  Uh…
Mayor Wilkins:  Boats did have cannons. And a loose one would cause it to rock. Oh, honestly. I don’t know where my mind goes these days. Why don’t you take care of that Spike problem? A committee, like you said.

The funeral scene after Cordelia’s injury was a fun twist (of course, having seen Angel season one before I watched this episode, it didn’t fool me for a second). But I love Willow’s outfit in that scene – something that’s still “her’ but less dorky than her usual outfits.

The episode ends with the soft melody, “The Loneliness of Six” as each member of the now estranged couples sits alone in sadness. But past the sadness comes Spike, rocking out as he zooms down the highway.