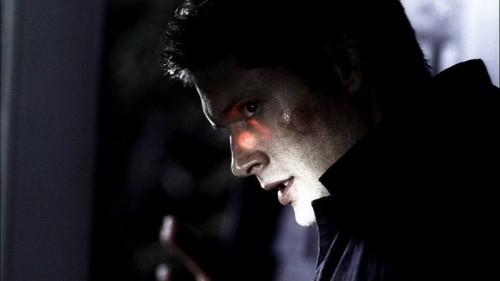 This episode started off with a glimpse at the middle of the episode (since it was a misdirect instead of stealing thunder from the climax, I didn’t mind), which seemed far more like an episode of Criminal Minds than Supernatural. That and the “normal” introduction to the attack – a friend falsely accused of murder – didn’t really influence me toward believing there was a natural explanation for all this. I hope Supernatural does throw in a few non-speculative scenarios eventually, if only to make red herrings less blatant. But in episode six of a show? The theory’s not even worth considering.

“Skin” did add a few twists to the shapeshifter trope. I hadn’t heard of the whole silver bullets thing to kill them before, but using silver to kill supernatural baddies is old hat. What impressed me was the whole “downloading memories,” thereby foiling the one easy way to tell the shapeshifter and the real person apart; needing the person to be alive to maintain the charade (unlike the First in Buffy the Vampire Slayer, which needed the person to be dead to impersonate them); and the elaborate skin-shedding process (which was pretty gross).

I liked that this episode continued to build on Dean and Sam’s relationship, which still needs some work if I’m going to get addicted to this paranormal-battling duo. I hate that I’m still lukewarmish about this show. It’s been almost two months since I watched the first episode and this is only number 6. In that same amount of time I’d watched 4 seasons of Bones, or watched 5 seasons of Buffy and 2 of Angel.

What say you, Supernatural fans? Should I keep going or give up on the show?