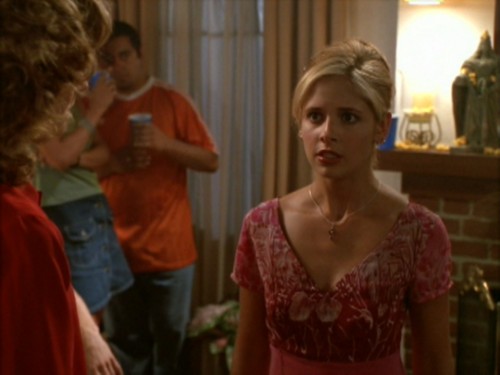 Buffy’s back in Sunnydale, and this episode picks up a few hours after the previous one ended, giving us the opportunity to see everyone’s reactions to Buffy’s return. My favorite is Xander’s; how they almost attack each other and then just stare at each other, until Buffy decides to break the silence:

Buffy:  Didn’t anyone ever warn you about playing with pointy sticks? It’s all fun and games until somebody loses an eye.
Xander:  You shouldn’t sneak up on people like that!

Of course, it’s a little less funny knowing what’s going to happen to Xander at the end of season seven. But the scene almost makes me want to be a Xander/Buffy shipper.

Speaking of future seasons, this episode serves as a microcosm of early season six – Buffy’s difficulty re-adjusting to the life she once knew, wanting to “leave” again, Giles’ joy at her return, her friends misunderstanding what she needs from them, and connections rebuilt by fighting bad guys.

I mentioned it in an earlier post, but I absolutely love Giles’ quiet smile of happiness in the kitchen. I also love how he seems to know exactly what Buffy needs at this point, even when the rest of the Scooby gang overrules him. In addition, it’s fun to know that Giles can hotwire a car. And I love how he goes after Principle Snyder at the end, smiling all the while. Plus this:

Giles:  Unbelievable. ‘Do you like my mask?  Isn’t it pretty?  It raises the dead!’ Americans.

I’m glad the writers deposed of Pat rather quickly. Like Ted, she was too annoying to make it through an entire episode. Makes other characters I wasn’t too fond of (such as Riley and Dawn) seem amazing in comparison. Buffy’s dream didn’t seem to have any reason, besides showing that memories of Angel are still haunting her. But the gang teasing Giles about the cat is fun:

Oz:  It looks dead.  It smells dead. Yet it’s movin’ around.  That’s interesting.
Cordelia:  Nice pet, Giles.  Don’t you like anything regular?  Golf, USA Today, or anything?
Giles:  I’m trying to find out how and why it rose from the grave.  It’s not as if I’m going to take it home and offer it a saucer of warm milk.
Oz:  Well, I like it.  I think you should call it Patches.

Oz:  We should figure out what kinda deal this is.  I mean, is it a gathering, a shindig or a hootenanny?
Cordelia:  What’s the difference?
Oz:  Well, a gathering is brie, mellow song stylings; shindig, dip, less mellow song stylings, perhaps a large amount of malt beverage; and hootenanny, well, it’s chock full of hoot, just a little bit of nanny.
Xander:  Well, I hate brie.
Cordelia:  I know.  It smells like Giles’s cat.
Giles:  It’s not my–

There don’t seem to be all that many pets in Sunnydale – perhaps because they’re easy bait for monsters? Willow seems to have most of them – her fish that Angelus killed, Amy the rat, Miss Kitty Fantastico. Drusilla had Sunshine for a bit, and the dog Rocky got killed in “Beneath You” – am I missing any others?

And I could probably write an entire post about the things people call Principal Snyder. This episode, even Buffy’s mom gets into it:

Joyce:  I’ve been on the phone with the Superintendent of Schools. At least he seems more reasonable than that nasty little horrid, bigoted, rodent-man.

I loved that Cordelia stood up for Buffy when everyone else was attacking her, even though her methods needed a little work. And we got a fun random appearance by Jonathan, too.

I felt it was pretty unrealistic that all the zombies disappeared – the mask simply animated corpses, so they should have just returned to being dead bodies once it was destroyed. Of course, that would have been fun to clean up and explain to the police. I didn’t mind there being zombies in this episode, but out of all the horror standbys (vampires, werewolves, ghosts, shapeshifters, creatures from other dimensions, aliens), they are my least favorite, so I’m glad they never became a main part of the show.