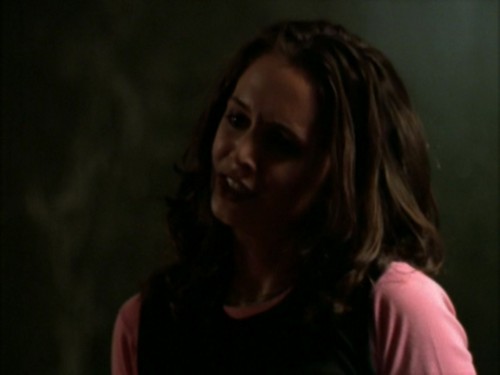 Yeah, it was only as I was getting ready to type the title of this post that I realized that “Hope” in the episode title referred to Scott Hope, the guy with a crush on Buffy. Sad, I know. However, this is only the second time I’ve watched the episode so it could have been worse.

Side note: I just reread most of the Buffy season 8 comics, and Scott is one of the few multi-episode characters who wasn’t deceased (presumably) when the show ended but didn’t show up in season 8. True, he was a minor character, but even Parker was referenced in the comics. But my main reason for mentioning the comics was to share this amazing poster of what season eight would be like as a movie (primarily the first 10 issues or so of the comics). Be sure to zoom in to get the full effect!

Out of all of Eliza Dushku’s characters, my favorite is Echo from Dollhouse. I think it’s because I get annoyed with the tough-girl attitude her characters often wear, but Dushku is stunning at portraying vulnerability. She gets to do that most often with Echo, but we get a taste of it here with our first glimpse of Faith.

Well, not the first glimpse exactly – for that we have crazy dancing, vamp dusting, and colorful storytelling. Since I know now that Faith’s from Boston, I was able to catch a few hints of an accent, but it seemed inconsistent (perhaps Faith’s trying to get rid of her accent and slips up occasionally?).

I find it interesting that Faith’s Watcher was a woman – was the show already setting up the Mayor as a father figure for her, and wanting to have him not compete with a memory? But I love Xander and Willow’s tour of Sunnydale High:

Willow:  And over here, we have the cafeteria, where we were mauled by snakes.
Xander:  And this is the spot where Angel tried to kill Willow.
Willow:  Oh, and over there in the lounge is where Spike and his gang nearly massacred us all on Parent-Teacher night. Oh, and up those stairs, I was sucked into a muddy grave.
Xander:  And they say young people don’t learn anything in high school nowadays, but I’ve learned to be afraid.

Mr. Trick seems to continue the trend of unique vampires (he’s no Spike however – the thing I hate most about season three is Spike’s absence for all but one episode). His techno-speak is refreshing after season one’s chants and rituals.

While Scott’s repeated efforts to connect with Buffy are cute, he pulled a big no-no – giving her the same gift her dead ex-boyfriend had. But it’s interesting to note the difference between the giving of the two rings. Scott’s is just a retro friendship gift for a crush. Angel’s is a gift from his past (perhaps the only untarnished thing he has from then) and a promise for the future to the woman he loves.

But my favorite part of the episode is this:

Buffy:  Angel was cured.
Giles:  I’m sorry?
Buffy:  When I killed him, Angel was cured. Your spell worked at the last minute, Will. I was about to take him out, and… something went through him… and he was Angel again. He-he didn’t remember anything that he’d done. He just held me. But it was… it was too late, and I, I had to. So I, I told him that I loved him… and I kissed him… and I killed him. I don’t know if that helps with your spell or not, Giles.
Giles:  Uh, yes, I, I believe it will.
Willow:  I’m sorry.
Buffy:  It’s okay. I’ve been holding on to that for so long. Felt good to get it out. I’ll see you guys later. (leaves)
Willow:  Giles, I know you don’t like me playing with mystical forces, but I can really help with this binding spell.
Giles:  There is no spell.