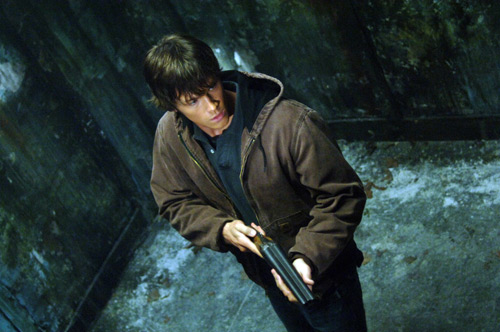 Okay, when I was making the photo collage for this week’s poll (favorite scary show), I had no idea the random freaky-looking Supernatural image I grabbed would turn out to be from the very episode I ended up watching the same evening! And it was one of Supernatural’s more creepy episodes, which made me regret deciding to watch it so late at night. Ah, well, onto the review!

I bookended watching the episode with two other shows I’m having a hard time getting into (but people/buzz keep telling me I should like), Doctor Who and Arrested Development. I figured perhaps an iffy episode of Doctor Who would make Supernatural seem better by comparison, but I happened to watch one of the most heartfelt episodes – at least so far – of the British show (“Father’s Day”). So it didn’t do Supernatural any favors, but I still thought “Asylum” was pretty decent.

It’s a fairly simple “evil spirits, find the body, salt and burn” episode, set in a creepy asylum. Far too much of the episode seemed to be characters wandering around the place, waiting for ghosts to pop out of any corner (or having them dart around behind the characters’ backs). Both the two cops that visit the place at the beginning of the episode and the two teens caught inside with the brothers later on seemed pretty cardboard – though I did like that the girlfriend knew how to use a shotgun.

As usual, this show rests on the relationship between Dean and Sam, and I am seeing signs of improvement in that area. The scene where Dean pretends to be an annoying reporter, and Sam makes him leave so he can bond with the cop and get answers was humorous. I also liked that Dean knew not to give the spirit-addled Sam a loaded gun – no tearful “I knew you wouldn’t shoot me” moments here.

The good son/rebel son dynamic is getting a bit old, though. As is the tug-of-war between looking for their father and hunting creatures (especially since creatures always win). At least there seems to be some movement on the father end (now that we know he’s just avoiding them) with the phone call at the end of the episode.

Watching this right after an episode of Doctor Who really helped me see the parallels between the two shows and why I’m having trouble getting hooked on both of them. Both have two characters traveling around in a specific vehicle putting their lives in danger saving people from otherworldly attacks. Doctor Who has more reoccurring characters so far, though Supernatural will eventually have more. The visual effects are better on Supernatural, but the storylines are more varied on Doctor Who. I like Dean and Sam better (though only marginally) than the ninth Doctor and Rose, but I know the British dynamic will change in later seasons, while I’m “stuck” with Dean and Sam for the duration of the American show.

My favorite shows, however, tend to have five or more main characters and be set in the same location. Everything from Community to Buffy to How I Met Your Mother to NCIS to The Vampire Diaries fits that mold. Maybe that’s why I never really got into Tru Calling (not enough main characters) or Revolution (characters scattered and on the move).

Anyhow, this was a decent episode of Supernatural, one of the better ones I’ve seen so far. I just hope it doesn’t give me nightmares (remember to not watch future episodes late in the evening!).