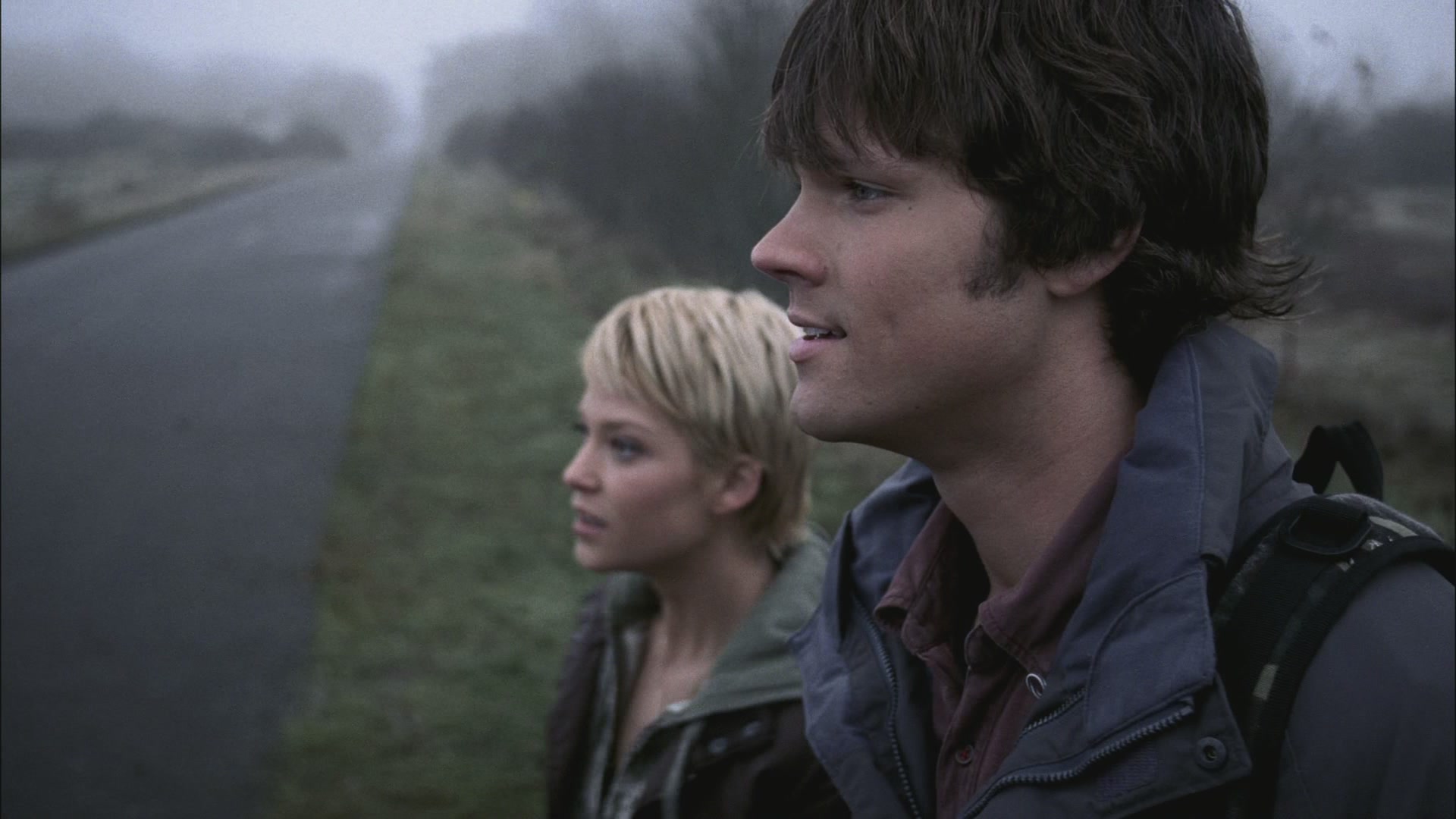 Well, the people who mentioned this was one of the better episodes of season one were right – I enjoyed this episode more than any of the previous ones. Interestingly, it was the first episode after the midseason break, which fits well for change to the holding pattern we’d been stuck in (Sam wanting to find their dad, Dean wanting to carry on their dad’s mission).

“Scarecrow” picks up with the duo right where the last episode left off – the call from their father, John Winchester. He wants the guys to stop looking for him, and he gives them info on another job. But Sam has finally had enough. The call came from a payphone in California, and that’s where he wants to head, not a small town in Indiana where road-tripping couples disappear yearly. He gets out of the car, grabs his gear, and starts walking. Surprisingly, Dean lets him go and drives away, leading to a refreshing change of format for this episode.

Sam comes across a fellow hitchhiker named Meg, and the two later meet up at a bus station and share “not wanting to live up to family expectations” stories as they wait for their bus. She seemed like more than a random one-episode character and I thought I’d seen the name come up before on Supernatural sites.

Dean arrives at the town in Indiana, but his direct approach in asking about the previous year’s couple leads to the sheriff escorting him out of town. He comes back and rescues this year’s couple from a creepy animated hook-handed scarecrow made out of last year’s victim (recognizable by an arm tattoo). Dean realizes how much easier this would be with Sam along, and he and his brother talk on the phone and make up, though Sam still plans to go after their dad. Dean even admits he respects the fact that Sam is willing to buck his father’s orders. (Yay for a well-acted scene! Interesting that the actors had a better connection in two separate places during one call than they had in some previous entire episodes.)

They figure out that the deaths are likely a ritual sacrifice to some sort of pagan god, and Dean finds a nearby professor to help him with determining which one. Only the professor is in on the ritual, and since the other couple is gone, Dean and a niece of one of the townspeople are kidnapped to be the sacrifice. Sam gets worried when Dean isn’t picking up his phone, and instead of getting on a bus with Meg, heads to make sure his brother is okay. He arrives just in time to rescue Dean and the niece, but the scarecrow grabs her aunt and uncle instead. The three burn the sacred tree fueling the god, preventing future animated scarecrows.

Sam tells Dean he doesn’t want to chase revenge for their mom and Jess, or go after their absentee father. He’s going to stick with the person he cares about who is right in front of him – finally moving from a begrudging/reluctant companion to one who will stick with Dean through thick and thin (hopefully!). I’m glad they finally brought that part of the show to a rest – the push-pull of leaving/staying was getting annoying.

And they started a far more intriguing story arc, as the final scene has Meg having the guy who picked her up pull over, then slitting his throat and collecting the blood in a chalice, which she uses to “call” her “father.” Yep, Sam was the safer choice of hitchhiker to pick up. We only hear Meg’s side of the conversation, but she’s unhappy at not being able to dispatch both Dean and Sam on her timetable.

So this episode had a lot of things going for it – change in format, start of new story arcs, and an interesting local bogeyman of the week. After “Asylum” seemed to have an endless amount of “wander in a creepy area and wait for something to jump out at you” moments, it was nice that this episode kept them collectively under 5 minutes, even with 3 separate scenes. This is the kind of episode I was looking for when I started the show. No, it’s not perfect, and I’m still longing for more of a Scooby Gang a la Buffy, but I genuinely enjoyed it and am actually looking forward to the next episode.

One thought on “Supernatural – Scarecrow”