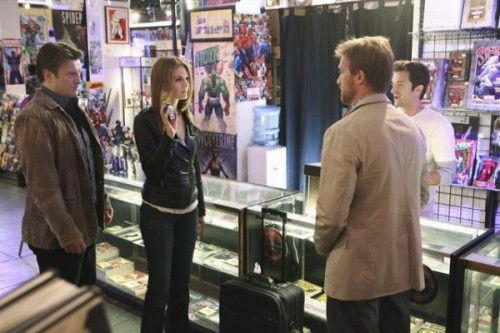 Yesterday’s episode of Castle was chock-full of geeky comic book superheroness. So today I thought I’d blog about those costume-clad episodes of TV shows we love. If I missed any, be sure to let me know in the comments!

For space, I’m not going to focus on the shows that are all about superheroes – whether reimaged comic classics (Smallville), new characters in ordinary clothes with various powers (No Ordinary Family, Alphas, Heroes), or masked vigilantes (The Cape). And I wasn’t going to mention Halloween episodes – but I couldn’t resist the few ones that popped into my head: Sheldon, Leonard, Raj, and Howard all dressing up as Flash (The Big Bang Theory). Abed becoming Batman (Community). And Brennan as Wonder Woman (Bones).

A man attacking a woman gets sliced in half by a sword, and the team soon discovers it’s the work of a costumed vigilante. They’re a bit reluctant to go after someone who’s administering justice throughout the city, but things are not as they seem. The costume is from a character in a popular online-only comic (which I thought was a nice plug for a newer medium for comic books). Castle gets plenty of opportunities to geek out during the episode, and even Beckett shares what superhero she would be (Electra, to Castle’s Bruce Wayne), mentions the first comic book she bought, and is embarrassed to have revealed that she pre-ordered Castle’s Derrick Storm graphic novel. (Wow, this is the fourth season, and I just now made the connection that Rick Castle named his character DerRICK.)

Sean Maher and Jewel Staite (Simon and Kaylee from Firefly) star in this episode where an artifact gives its wearer superpowers. Pete recognizes the costume as mimicking the Iron Shadow, one of his favorite superheroes, and generally revels in the comic-book aspect of this mission. He’s still waiting to receive his comic book collection from home, which may have gotten lost during shipping, but Myka surprises him with the rare Iron Shadow issue he’s missing.

Bones – “The Superhero in the Alley”

For some reason, when I heard about the Castle superhero episode, I thought they’d already done one. I think it was this episode I was remembering instead. Booth and Brennan try to figure out how a costumed teenager died, and Angela reconstructs the unfinished comic book found with him. Despite his geekish tendencies, Zack had never read comic books before, but he makes up for it in this episode. It’s interesting that several scenes from this season take place in a bowling alley, and the last episode that has aired to date was mostly set in a bowling alley as well.

Psych – “Shawn vs. the Red Phantom”

This episode goes beyond comic books to a full-blown convention. Shawn and Gus track a missing teenage boy there only to find he has disappeared as well. Clues point them to website reviews of superhero movies and eventually a villainous plot ripped right from the pages of a comic book. My favorite part of the episode is when Shawn turns his fake psychic powers in a show to get attendees’ attention, complete with help from Gus’s “magic head.”

Any other shows you can think of that have a superhero episode?