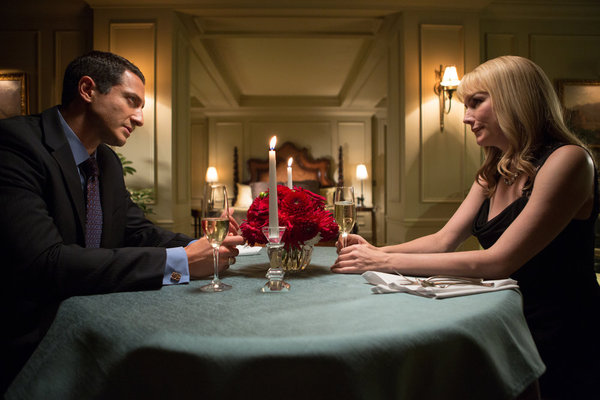 This Monroe-centered episode introduces a new enemy, gets rid of a past frenemy, and sends Rosalee out of town on a bus – for the character to visit an ailing relative, and for the actress to go on maternity leave (Bree Turner and her husband recently welcomed a baby boy, Dean, to their family).

Full review at: Billie Doux: Grimm: Over My Dead Body.

Nick and Monroe are enjoying quiet evenings at home with their respective sweethearts – Monroe is having Rosalee over for the first time and talking about clocks, while Juliette made up a dinner she’d previously marked as one of Nick’s favorites. While Juliette still doesn’t remember Nick prior to her coma (and though the promo for this episode seemed to indicate otherwise, she doesn’t get those memories back this week – the clip is also in next week’s promo), she wants to get to know him.

Renard gets a call from a mysterious blonde woman whose private jet has just arrived in Portland. (Seriously, what is up with Renard and blondes? Adalind, her mother, and now this woman.) He and Mia apparently share a history, and she seems to belong to another one of the royal families. Mia is played by Alice Evans, who I wouldn’t have known a week ago – fans of The Vampire Diaries will know her as Esther, mother of the original vampires.

These pleasant evenings are contrasted with a bar scene, where Angelina (Monroe’s ex from “The Three Bad Wolves” episode last season) fends off the advances of her date and ends up killing him in the parking lot. Trouble is, he’s a Wesen hit man, and the men who hired him hold a gun to her head and offer her three choices: death, jail, or taking his job. She chooses the latter, then busts in on Monroe and Rosalee sharing a kiss to deliver the bad news – she’s been hired to kill him.

Monroe calls Nick, and after reluctantly agreeing to a truce with murderer-on-the-run Angelina, Nick takes Monroe to Hank’s for his own safety. That leads to two unusual pairings for the episode. Hank quizzes Monroe about Wesen (leading to a more concrete explanation of the two kinds of woge – the one humans can see, and the one only Grimms and other Wesen can), while Nick teams up with Angelina to find the men who hired her. She confronts one (still keeping her cover) and finds out two important details: they’re only middlemen for the job, and the person who hired them wants Monroe dead because he’s friends with a Grimm.

With Rosalee’s over-the-phone help, the four hatch a plan to fake Monroe’s death with a potion that will make him appear dead for a few hours. (Though why they didn’t give him the potion closer to the meet time if it had a time limit?) Angelina shows the middlemen Monroe’s “body” while Nick and Hank hide out of sight. The middlemen call the person who hired them, the person’s car pulls up, and Mia steps out.

As is becoming an annoying habit with this show, the potion Monroe took has very specific symptoms for when it’s going bad, which impacts the main plot. In this case, Angelina notices the symptoms before everyone leaves, and performs mouth-to-mouth to revive Monroe before he dies for real. Nick and Hank jump into the ensuing chaos, and when the dust settles, the middlemen are dead, Mia has escaped (to be confronted by Renard on her jet), and Angelina has taken a fatal bullet to the chest. Monroe buries her in traditional Blutbad fashion.

I wasn’t sorry to see Angelina go. She was a one-note character for both of her episodes, and Jaime Ray Newman’s acting never seems to flow right with any show I’ve seen her on (and I’ve seen her on at least eight).

Hank seems to be adjusting to this whole off-book Wesen thing far better than Nick did – though of course, he has Nick’s experience with balancing the life of a cop and the Wesen world to help him out. His presence also provides a great entry point for viewers new to the show – he asks the questions they want answers to.

This wasn’t one of Grimm’s best episodes, but many fun Monroe moments and the introduction of Mia to further the intrigue did help me see past the awkward pacing and thin plot.

Be sure to enter our October Grimm giveaway!