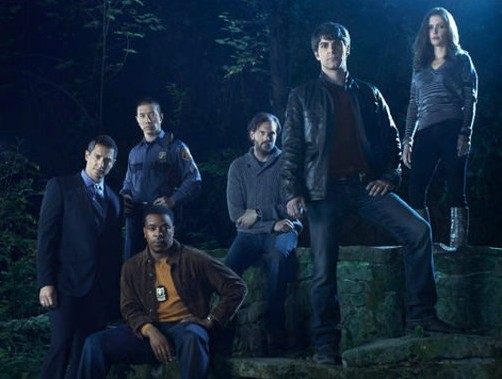 A spooky month deserves a spooky show giveaway, right? And so, for the month of October, TV Breakroom is giving away season one of Grimm! If you already own the first season of this awesome show (or if you live outside the US), you can choose a $15 Amazon gift card instead. I’m also reviewing Grimm on the site Billie Doux, so be sure to check out my reviews (be forewarned – since they are reviews, there are plenty of spoilers)!

Portland detective Nick Burkhardt starts seeing ordinary people morph into legendary and animal-like creatures, and learns from his dying aunt that he is the last in a long line of Grimms. Like the fairytale-writing pair of brothers, Grimms both catalog and defend the world against these supernatural creatures called Wesen. While Wesen appear human, a Grimm can see who they truly are when they lose control.

Nick teams up with Monroe, a reformed Blutbad (a wolf-like Wesen), who helps him understand this new world and solve Wesen-related crimes. Nick’s girlfriend, Juliette, and partner on the force, Hank, are both ignorant of Nick’s new abilities. Captain Renard, Nick’s boss, knows what Nick is, but chooses to keep that knowledge, and his own true nature, a secret. Part crime show, part supernatural drama, Grimm mixes in humor and mythology while turning fairy tales on their heads.

I’m using Rafflecopter for this giveaway, so please let me know if you have any troubles with it! I tried to make it as easy to understand as I could. Some ways enter will require doing something and then coming back to fill in the needed info, others you can do up to once a day! If you have other ideas of activities that you believe should earn entries, let me know and I may add them!