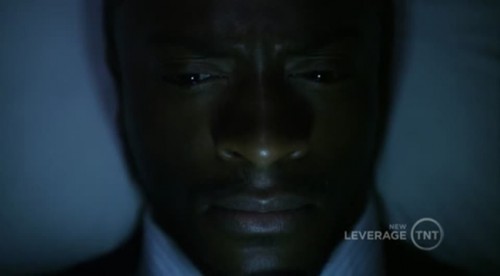 I recently watched a new episode of Leverage (“The Grave Danger Job”), and it started out with the scene pictured above – Hardison waking up in a coffin. Then the opening credits rolled, and the next scene had the dreaded words at the bottom: Two Weeks Earlier.

A lot of shows use this technique at one time or another, giving audiences a glimpse of the climax to hook them into watching the episode. Even the entire premise of How I Met Your Mother is based on this – the beginning scenes in many episodes are set in 2030, and the narrator in every episode is 2030 Ted.

For some reason, most of the time TV shows are structured this way, it really annoys me. I’m the type of person who doesn’t look at the last few pages of a book ahead of time, tries to watch movie sequels in the correct order, and puts off reading book two in a series until I’ve read book one. I feel these flash forward clips steal the thunder from the climax, and my interest drops away, both when they let me know that the next scene is however many days in the past, and when they return to the climax moment in the regular narrative.

Yet I didn’t mind when they showed a clip of Hardison in the coffin on a preview for “The Grave Danger Job.” So it wasn’t the spoiler itself that bugged me. Maybe I was bothered because it felt like the show was cheating to drum up more suspense, when it actually cheapened what would have been a great dramatic moment.

The only time I remember actually enjoying a flash forward beginning was on an episode of NCIS: Los Angeles. It showed one of the main team members getting shot, and it was only later revealed after the event replayed during the climax that the whole thing had been a con. So they weren’t only conning the bad guys, they were conning the audience too. I thought it was brilliant.

A recent study showed that people enjoyed reading a short story more if they’d been given spoilers about the ending or the climatic twist. People who love reading the end of a book praised the findings, thinking they finally had justification for their method of reading.

I disagree. Sure, they got more pleasure out of reading the story, but that was because the tension was gone. The suspense had vanished. Suspense is what keeps readers’ attention through a whole novel. Suspense keeps people glued to their seats in a movie theater. Suspense keeps viewers tuning into most TV shows each week.

Knowing the end and/or the dramatic twists of a story (whether told through print or film) also ruins any element of surprise. You can only watch something for the first time once. Why would you ruin that first time experience with spoilers and knowing the end? I would love to somehow remove a few of my favorite TV shows from my mind to be able to again experience the wonder and awe and surprise of watching them for the first time.

Not that rewatching a show is bad, just a different experience. When you rewatch a show, you have the knowledge of how everything will work out in the back of your mind, which does remove some of the tension. But you’ll have forgotten little details that will surprise you along the way, and hints of future twists will pop out at you.

So I think that’s part of the reason I don’t generally like episodes that begin in the middle of the action, then back up to the beginning of the story. The writers are trying to mix second viewing elements into my first viewing, and I don’t want them messing up the only time I’ll watch the episode for the first time.

Do you like previews of what’s to come later in the story? Or do you prefer letting things unfold chronologically?