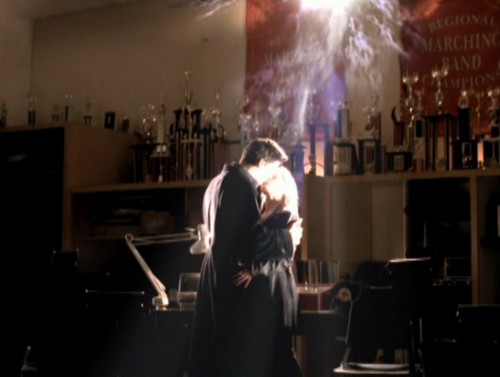 This is one of my very favorite episodes of Buffy – and it’s not just because it features Christopher Gorham (Auggie on Covert Affairs). There’s a symmetry to this episode, sort of a poetic rightness. But more on that in a bit.

The episode opens with a brief scene at the Bronze, where it’s clear Buffy’s still blaming herself for what happened to Angel, and now to Jenny. (Oz is absent again – somehow I’d remembered him playing a larger role in season 2 than he actually did.) The story then moves to a couple fighting, which Buffy interrupts by kicking a gun out of the guy’s hand. A few more strange things happen, including Xander’s locker sprouting an arm and trying to drag him in.

Giles:  Ooh! Sounds like paranormal phenomena.
Willow:  A ghost? Cool!
Xander:  Oh, no, no. No. No cool. This was no wimpy chain rattler. This was ‘I’m dead as hell, and I’m not gonna take it anymore.’
Giles:  Well, despite the Xander-speak, that’s a fairly accurate definition of a poltergeist.

Giles thinks it’s Jenny, but Buffy’s flashback dreams and other clues point to a 1955 murder-suicide. Willow, who has taken to teaching like a toddler to a mud puddle, does some research via Jenny’s files and sites on paganism. (But didn’t Angelus destroy Jenny’s computer? Perhaps they were on her home computer.) But with the sites and the exorcism spell and the healing rose quartz and the scapulas, this episode seems to mark Willow’s first step toward witchcraft.

Xander:  Something weird is going on. Isn’t that our school motto?

Angelus, Drusilla, and Spike move into an abandoned mansion on the edge of town. Things are getting worse between Angel and Spike. Angelus is starting to act almost as crazy as Drusilla (which is saying something), recklessly provoking Spike while Dru loves it that her two guys are fighting over her. But Spike is not the sort of vampire you want to provoke. The murderous intent in his eyes makes the perfect lead-in to the season finale.

I love the feel of the 1950s flashbacks. The music, clothing, and lighting bring the period to life even though the building remains the same. Some of the paranormal occurrences look a little fake, but I thought they did a great job with Cordelia’s perceived disfigurement. And I believe this is the first episode where the mayor is mentioned, and it shows that Principle Snyder is afraid of him (knowing his fate, he has good reason to be).

The gang figures out the ghost keeps reenacting what happened that night, with the same result. (On another tangent, why hasn’t this happened before during the 40-some years since the incident? Is this the first year since then that they’re doing another Sadie Hawkins dance, and that’s what triggered it?)

Buffy:  He wants forgiveness.
Giles:  Yes. I imagine he does. But when James possesses people, they act out exactly what happened that night. So he’s experiencing a form of purgatory instead. I mean, he’s doomed to kill his Ms. Newman over and over and over again, and…forgiveness is impossible.
Buffy:  Good. He doesn’t deserve it.
Giles:  To forgive is an act of compassion, Buffy. It’s, it’s not done because people deserve it. It’s done because they need it.
Buffy:  No. James destroyed the one person he loved the most in a moment of blind passion. And that’s not something you forgive. No matter why he did what he did. And no matter if he knows now that it was wrong and selfish and stupid, it is just something he’s gonna have to live with.
Xander:  He can’t live with it, Buff. He’s dead.

My absolute favorite part of this episode is the climax, where Buffy and Angel act out what happened that night. Only this time, James chooses Buffy to play his role, with all her guilt about destroying the person she loved. And as the scene plays out, they don’t seem to be simply reciting events from decades ago. They are having the conversation they would have if Angelus could be Angel again, just for a few minutes.

The “just wake up and stop loving someone” part is so perfect for Angel and Buffy, and the normal life part screams the end of season three. Yet to continue the perfection of this scene – this time Grace doesn’t die. Because Angel is a vampire and can’t be killed by a bullet. So this time, when James goes to reenact his suicide, Grace is able to stop him.

Ooo, that last line is so perfect. All I can see is Angel in the alley, screaming Buffy’s name as his soul leaves him. But my heart breaks for Buffy, in that one moment after the kiss, when Grace and James’ spirits have gone. Buffy whispers, “Angel?” and for that half second you can see the wild hope that rises in her. Maybe Angel is back. Maybe he really does forgive her for what she did. But then he shoves her away, and she shatters.