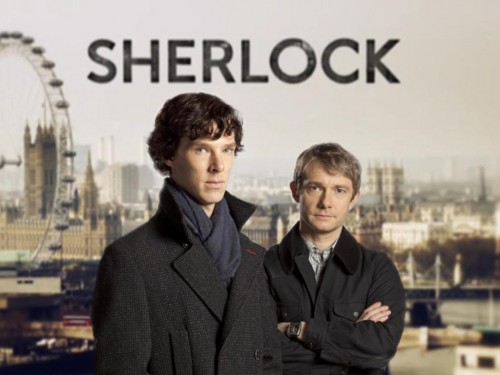 Words cannot express how much I enjoy this series. Benedict Cumberbatch and Martin Freeman bring the Victorian detective to the year 2010 in a smart, witty manner. The first season’s three 90-minute episodes felt like a movie trilogy on their own, yet as soon as I finished I wanted more of this show’s particular brand of scathing dialogue and dry humor.

This post won’t be a proper review, as it’s been far too long since I watched the show and I’d like to comment on each episode in detail at some later point. But if you’re looking for detailed reviews now, go straight to my friend Ruth Anderson’s blog, where she elaborates on “A Study in Pink,” “The Blind Banker,” and “The Great Game.”

If you’re wondering how the tales translate into the present, just imagine Sherlock Holmes texting. And John Watson recording stories about his eccentric roommate on his blog. While I’ve never read an actual Holmes novel, from the bits I’ve caught over the years and reviews I’ve read, this show pays tribute to its source material in many fun and unique ways.

While I was aware of Martin Freeman’s acting in the past (primarily in The Hitchhiker’s Guide to the Galaxy, but I can’t wait to see him as Bilbo Baggins in The Hobbit), this was my first exposure to Benedict Cumberbatch (except for seeing him a minor role in Amazing Grace), but after this I plan to watch for his appearance in other shows and movie.

Season 2 (or series 2, if you’d prefer British terms) is filming now in London, though it was delayed a bit by the riots.