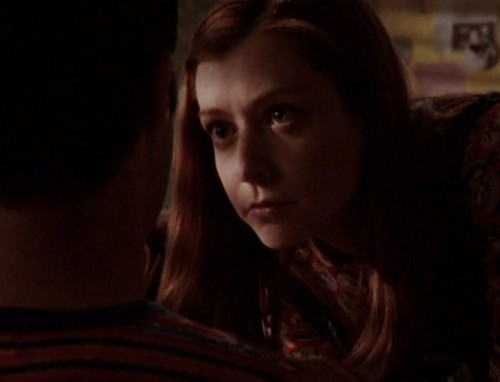 Season two’s final standalone episode brings forward an aspect of high school life that is almost overlooked on Buffy – sports. Aside from Buffy and Dawn trying out for cheerleading and the football game on “Some Assembly Required,” this is the only episode that gives much emphasis to Sunnydale High’s athletic program. But since none of the gang is into sports, that makes sense. This episode provides two other reasons:

Cordelia:  Well, all I know is, my cheerleading squad wasted a lot of pep on losers. It’s about time our school excelled at something.
Willow:  Hmm. You’re forgetting our high mortality rate.
Xander:  We’re number one!

So I guess it’s understandable that a lot of sport cliches get pushed into this one episode. Jocks’ popularity and sense of entitlement. Winning at all costs. Teachers pressured to give passing grades. Steroid use.

Only, since this is still Buffy the Vampire Slayer, the steroids have more than just their usual effects. The DNA-altering mix is turning the swim team into sea monsters. And who knew Cordelia could draw?

With the piles of skin and the half-eaten nurse, “Go Fish” is one of the show’s more gruesome episodes. Angel only makes a brief appearance, Oz is absent (again), but Jonathan has a couple of fun scenes. Willow interrogating him is hilarious, but I didn’t laugh because all I could see was her trying to kill him, four seasons from now.

After not showing up for most of the season, with this episode and the past one, Principle Snyder is finally making his presence known (likely building up for his role in the two-part finale). And Shane West (Michael from Nikita) has a brief cameo in the episode.

Xander and Cordelia’s relationship was fun to watch, both with Cordy’s new respect when Xander joins the swim team and her comments after she thinks he’s been turned in a sea monster:

It’s me, Cordelia? I know you can’t answer me, but… God, this is all my fault. You joined the swim team to impress me. You were so courageous. And you looked really hot in those Speedos. And I want you to know that I still care about you, no matter what you look like. And… and we can still date. Or, or not. I mean… I understand if you wanna see other fish. I’ll do everything I can to make your quality of life better. Whether that means little bath toys or whatever.

In the end, Xander saves Buffy, and the coach gets his own form of poetic justice. One thing I noticed this time watching season two – quite a few of the episode focus on Xander, and hardly any do on Willow. But of course that will all change in coming seasons . . .