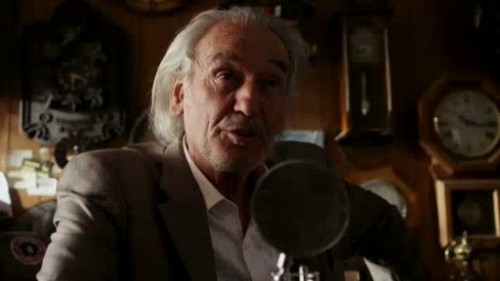 This week’s episode of Burn Notice was chock full of extraordinary guest stars. To start off, there was Patrick Bauchau (pictured above), probably best known as Sydney on The Pretender (Jeffrey Donovan also was on several episodes of The Pretender, as Jared’s brother, Kyle). I watched about two seasons of that show with my family, until I started a full-time job and fell behind. I’d still like to finish it someday.

Though they showed a picture of Lucien Dobos, the watchmaker/bomb maker/war criminal Bauchau plays, last week, it wasn’t until Michael and Sam met him in person that I recognized the actor. That’s probably because his most distinctive quality is his accent. I love his accent! He should really do some voice work. At times in this episode, I was almost rooting for him as he matched wits against Michael. Too bad he was killed off at the end of the episode – I would have loved him as a reoccurring character. At least he and Michael ended up on the same side for the last few seconds of his life, just long enough for Michael to get another leave on Max’s killer.

James Frain, who I’ve seen on The Count of Monte Cristo and more recently on the short-lived superhero drama, The Cape, shows up as one of Jesse’s clients. And yes, he’s a villain in all of them. In a fun twist, his background seems ripped right from The Count of Monte Cristo, with Frain playing Fernand Mondego’s role. He left his business partner to rot in a Cuban jail, then stole his work and his wife. When the wife suspects someone is breaking into the house, Jesse and Fiona come in, only to discover the partner is simply trying to get his work back. They agree to help him, and what following includes a bunch of elaborate ruses, including Michael playing a crazy stalker.

The wife, Sadie, is played by the third guest star, Darby Stanchfield. She took me a bit longer to place, but she plays Shannon Gibbs on NCIS.

With all that going on in one episode, it’s not surprising that Madeline doesn’t make an appearance, nor Agent Pearce, Michael’s CIA handler. And is it just me, or is Fiona getting annoying in this season? Yes, we get it that preoccupied ex-spies typically don’t make good boyfriends. We know Michael would die for Fiona in a heartbeat, but must we stress in every episode how bad he is at the little stuff? It just makes Fiona seem whiny and selfish. But at least their being couple doesn’t ruin the awesome chemistry the team has together.