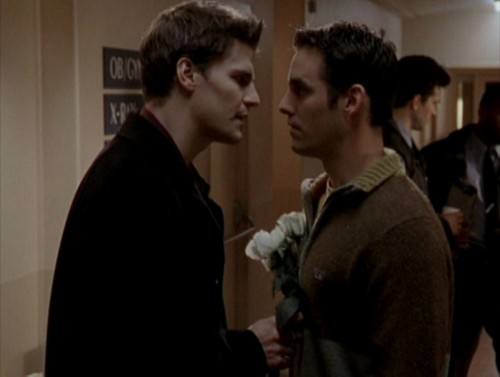 Okay, I don’t know who came up for the title for this episode, but it’s vague to the point of annoyance. I had to see a screenshot of the episode to remember what it was about. On top of that, it seems inanely redundant. I know the kid calls the monster “Death” and its German name means “child death,” but even as someone who watched the episode before, I didn’t make the connection of the title to this episode. Death is all too common in the Buffyverse.

Names aside, this is one of the few Buffy episodes that’s as spooky as Supernatural. Hospitals are creepy enough on their own, but add an invisible life-sucking creature that goes after kids and you have the stuff nightmares are made of. Buffy’s memories of what happened to her cousin and her delirious state only add to the dream-like quality.

This episode follows up with “Passion” well, having Angel come after Buffy twice in her weakened state, but her friends (especially Xander) have her back. Is Angel ready to kill her yet, or just torment her in her weakened state? At the cemetery it seems that his plan is to pick off her friends, one by one, preferably in front of her.

Despite the seriousness of the situation, the Scooby gang manages to add a huge helping of humor to an otherwise somber episode, perhaps to prove that laughter is the best medicine?

Xander:  Man, Buffy! My whole life just flashed before my eyes! I gotta get me a life!

Cordelia:  So this isn’t about you being afraid of hospitals ’cause your friend died and you wanna conjure up a monster that you can fight so you can save everybody and not feel so helpless?
Giles:  Cordelia, have you actually ever heard of tact?
Cordelia:  Tact is just not saying true stuff. I’ll pass.

Xander:  Finding out who this thing is takes priority. Cordy, you should go with Giles.
Giles:  Why do I have to have… Uh, good thinking. I could do with a research assistant.
Cordelia:  Let’s go, tact-guy.

I love Willow pretending she’s crazy by screaming that she’s covered with frogs (if I remember right, that’s the one animal she’s afraid of) to distract the security guards. One of the guards (the one Cordelia distracted earlier) is played by Willie Garson (Mozzie on White Collar). Until Eliza Dushku’s guest role on White Collar a few weeks ago, he was only credited actor to ever appear on both shows.

Other notable bits in this episode: We get to see Buffy as a little girl, and she sees herself in the role of the hero even then (perhaps an early hint of her awareness as a Potential?). Cordelia knows Xander’s not over Buffy. And Oz is once again absent.

The episode ends with a fun scene as the trio of friends lounge in Buffy’s room, watching TV and generally acting like six-year-olds:

Buffy:  Oh, mom?
Joyce:  Mm-hm?
Buffy:  I wanted crunchy peanut butter.
Joyce:  Oh, sorry.
Buffy:  A-and I said extra jelly.
Joyce:  Anything to help my daughter get well.
Willow:  Oh, and while you’re up, could I get a refill? It’s just I’m so comfortable.
Joyce:  Of course.
Willow:  Thanks.
Xander:  Oh, oh, oh, and another bag of cheesy chips.
Joyce:  Uh, you ate the last one.
Xander:  No, there’s another bag hidden behind the raisins.
Joyce:  (sighs) I’m on it.
Xander:  Your mom’s tryin’ to Bogart the cheesy chips. What’s that all about?