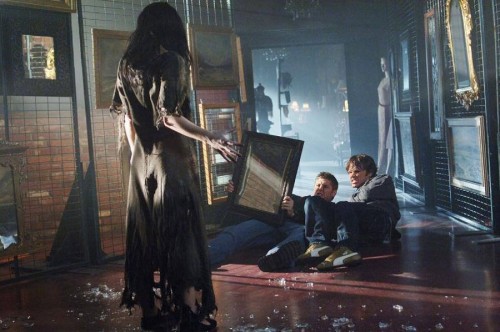 Another good and creepy episode with the Winchester brothers. Out of all the shows I watch, Supernatural is the one most likely to make me worry about things that go bump in the night. I say most likely, because TV shows and movies rarely scare me – but then, I don’t really seek out ones that do. Horror is not my genre of choice. I much prefer thrilling adventures and deep characterization to cheap scare tactics.

It’s interesting – the three episodes of Supernatural I’ve enjoyed the most so far have all been ghost stories. Perhaps it’s because those types of stories seem to have more emotional depth, and their serious nature suits the somber tone of the show. Most episodes of other speculative shows I watch feature bad guys you can punch and behead (and sometimes toss out witty insults and puns while doing so).

“Bloody Mary” starts out with a trio of preteens playing Truth or Dare, with one dare involving saying “bloody Mary” three times in front of a mirror. Sam and Dean notice an unusual death notice in the paper, and head to Toledo to investigate.

The topic of money comes up briefly when Sam bribes a morgue clerk with Dean’s poker “earnings,” which makes me wonder what Dean and Sam are living on. Yes, a few of the jobs they could get with referrals would earn some cash, but the majority of the work they do involves no payment at all. Yet they have to pay for gas, food, and motel rooms somehow. What about Sam’s college tuition?

I love it that the ghost, set free by the breaking of the mirror, has to confront the idea of all the people she’s killed when faced with another mirror. But why did Dean’s eyes start bleeding too? Was it the power of the ghost set free and out for vengeance, or does Dean have a secret in his past involving a death, too?

I liked the way this episode finally starts to deal with some of what Sam’s going through with Jessica’s death. And a bit more of the mystery is peeled away. Sam had dreams about what was going to happen? Since he was a baby when this thing killed his mother, even if he heard all the details later there is no way he’d be able to picture it exactly. So it had to be some sort of psychic warning (which given one spoiler I’ve seen about the show, makes perfect sense). But I’m glad they still showed that it’s effecting him. Something that traumatic, even if Sam’s making steps toward healing, should not go away in 4 episodes.