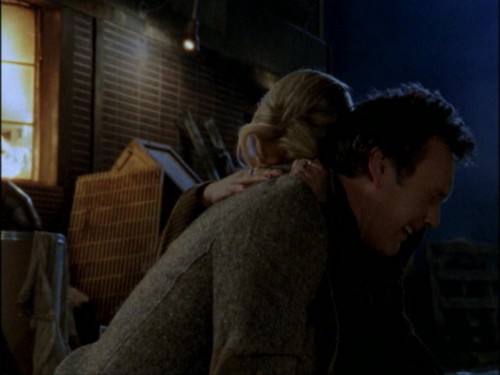 As soon as Angelus begins narrating this episode, you know it’s going to be dark and deadly. After two episodes of biding his time, sending Buffy undead classmates and roses, Angel begins to strike at her, both directly and indirectly.

At first, he’s merely watching from the shadows. Buffy doesn’t sense that he’s there, though she was able to do it quite easily before, when he had a soul. None of the four leaving the Bronze even notice as he kills someone right in the alley. (Speaking of which, where was Oz in this episode? Perhaps his band had a gig out of town, but would he really be absent from school for several days?) Angelus sneaks into bedrooms, leaving drawings and dead fish. And then he goes after Buffy’s mom.

As Spike warns him, he’s playing a dangerous game, taunting a Slayer. But Angelus doesn’t seem to care. Perhaps he’s trying to create a new masterpiece, to top what he did to Drusilla. I don’t think he’s intending to turn Buffy into a vampire (though that would be a volatile mix, being a Slayer and a vampire, especially if he drives her insane first), just to hurt her. He tends to be pretty picky about who he turns, and having her around, even as a vampire, would be a constant reminder of the humanity he was once reduced to. After all, he didn’t turn his family into vampires, but simply destroyed them and any connection he had to humanity. Becoming a vampire, to him, is an honor, a reward, and he wants to punish Buffy. Now I could see him turning someone close to her to punish her, but not Buffy herself.

Of course, the tragedy of this episode is the cruel end to Giles and Jenny’s love story. First Giles’ past gets between them, then Jenny’s, and just as they get past that AND just as Jenny discovers a way to restore Angel’s soul, Angelus strikes. Joss Whedon is so mean. (Spoilers ahead for the season eight comics!) And it’s horribly sad but almost right in a way that both Jenny and Giles die in the same way. At the hand of the same person. (Though controlled by Angelus in one instance and Twilight in the other.) Side note: I think that’s one reason why people liked Spike even when he was still evil. He never killed anyone we cared about.

It’s Drusilla’s vision that tips Angelus off that Jenny’s trying to restore Angel’s soul. That’s one thing that bugs me about Drusilla – she doesn’t fight fair with all her psychic visions and hypnosis. But she’s hilarious in this episode, carrying the owner-less (thanks to her) puppy around. I love how she names it Sunshine, which for a human would be like naming it Radioactive Poisoning or Arsenic.

Speaking of lighter moments, I love how excited Willow gets about covering the class for a few minutes:

Jenny:  Um, I might be a little late tomorrow. Do you think you could cover my class till I show?
Willow:  Really? Me? Teach the class? Sure!
Jenny:  Cool.
Willow:  Oh, wait. W-what if they don’t recognize my authority? What if they try to convince me that you always let them leave class early? What if there’s a fire drill? What if there’s a fire?
Jenny:  Willow, you’re gonna be fine. And I’ll try not to be too late, okay?
Willow:  Okay. Good. Earlier is good. Will I have the power to assign detention? Or make ’em run laps?

The episode ends on a somber note as Willow prepares to take over the class until a new teacher arrives. And a lone floppy disk falls to the floor, awaiting a future episode . . .