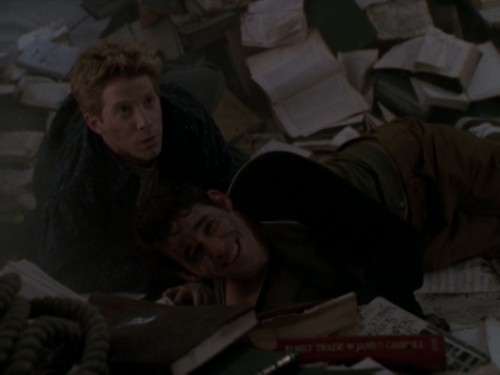 My 100th post! I don’t think I’ve ever had a hundred posts written within one year on a blog before. Just nine months ago I was almost embarrassed to link to this site since I had so little content up. Now I have well over 50,000 words spread throughout the site.

“Gingerbread” is Buffy the Vampire Slayer’s witch hunt episode. Now for all the things I love about Buffy, one of the things I dislike most about the show is the witchcraft in it. I know it’s mostly used in the mythology of the show as a story device, but it covers a huge spectrum from light spells to summoning dark powers, and even the show itself varies on how it is portrayed morally. In the end it’s seen as a force for good, evil, and many shades of gray in between, but this episode lacks that complexity.

Side note: I found it rather interesting that the first major spell Willow did (to restore Angel’s soul), if you look at the translation of the words she uses, she’s not begging some evil spirit. She’s beseeching God. Fitting, since the whole soul thing fits best in His realm anyway.

The broad strokes of this episode turn it into a battle cry for tolerance and accepting differences. The entire town gets into an uproar over the deaths of two children, and begins to target those suspected of witchcraft and anyone else different. The episode’s saving grace is that it senses the ridiculousness of the fervor and exaggerates it, throwing in some humor along the way.

Xander:  Whoa, whoa, whoa. I’m still spinning on this whole fairy tales are real thing.
Oz:  So what do we do?
Xander:  I don’t know about you, but I’m gonna go trade my cow in for some beans. (Gets a look.) No one else is seeing the funny here.

It’s interesting – this fall there are two whole shows premiering based on the premise that fairy tales are real. In Once Upon a Time, the fairy tale world is separate from this one, and the characters trapped in this world have forgotten who they are. In Grimm, the fairy tale creatures look like humans to all but a select few.

I love Buffy’s conversation with Angel in this episode:

Angel:  Buffy, you know, I’m still figuring things out. There’s a lot I don’t understand. But I do know it’s important to keep fighting. I learned that from you.
Buffy:  But we never…
Angel:  We never win.
Buffy:  Not completely.
Angel:  We never will. That’s not why we fight. We do it ’cause there’s things worth fighting for.

And I think it’s awesome that Cordelia, who has been acting like a bitca for the past several episodes, comes in to save the day in her own unique way.

Cordelia:  Wake up! (Slaps Giles repeatedly.)
Giles:  Cordelia?
Cordelia:  Took you long enough to wake up. My hand hurts.
Giles:  Pity. Oh… Why are you here?
Cordelia:  Things are way out of control, Giles. First the thing at school, and then my mom confiscates all of my black clothes and scented candles. I came over here to tell Buffy to stop this craziness and found you all unconscious… again. How many times have you been knocked out, anyway? I swear, one of these times, you’re gonna wake up in a coma.
Giles:  Wake up in a… Oh, never mind.

Their conversations always make me laugh. And it’s nice to see Cordy doing more than just dropping snide remarks at the gang.

The heartbreaking part of this episode is how Joyce slowly turns against her daughter. I actually cringed when she lumped monsters, witches, and slayers in the same group, right in front of Buffy (and half the town). And what Joyce almost did isn’t discussed between them at the end of the episode, though the following one works toward re-establishing their bond.

In all, this is one of my least favorite episodes of season three, but it was still a fun watch the second time around.