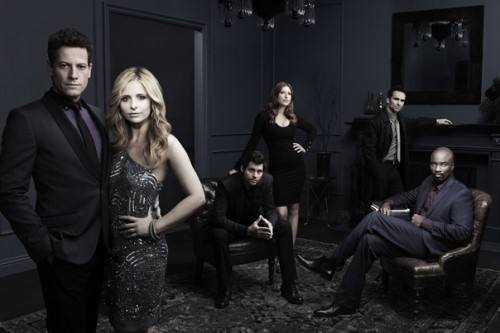 Sarah Michelle Gellar is back! That was really the only tagline needed for the new noir drama on the CW. But the premise is intriguing by itself. Bridget runs away the night before her testimony in a criminal trial and goes to visit her estranged twin sister Siobhan. When Siobhan apparently kills herself, Bridget sees a way out and assumes her sister’s life. But she soon learns that Siobhan has secrets of her own, and someone wants her dead, too.

I watched a lot of the Comicon coverage for Ringer, and several trailers, so almost all of the secrets revealed in the pilot (and even a few that weren’t) had been spoiled for me. So I didn’t expect to be wowed by it, and I wasn’t. I’m looking for the next episodes too, though.

So for those of you who didn’t see all the previews, or didn’t watch the premiere episode, beware of spoilers!

This is the first thing I’ve seen Gellar in since Buffy, so I was a little surprised at how much older she looked, but it was more her clothes and mannerisms than her actual face. I noticed a few Buffy references in the first segment of the episode, but my guess is they were more imagined than actual hat tips to the show. The gargoyles on the penthouse roof gave a cemetery-link feel to the first moments of the episode, so that was probably deliberate. I probably only noticed the word “amends” in a conversation since that was the last Buffy episode I watched, and the word cookie because the cookie dough conversation was in the final Buffy episode. And when Bridget mentioned waitressing, I could only think about how that paralleled with the final issue of the Buffy season 8 comics (season 9 starts today!).

One of the “surprises” that got ruined was when Kristoffer Polaha seems to be following/stalking Bridget. I already knew he wasn’t a hitman out to get her, but Siobhan’s best friend’s husband Henry with whom Siobhan was having an affair. The show did manage to keep the surprise of Siobhan’s pregnancy, and that Siobhan blames Bridget for her (apparent) son’s death.

It’s easy to see Bridget as the hero in this story, as she tries to right Siobhan’s wrongs – breaking off the affair, trying to mend things with Andrew (Siobhan’s husband), reaching out to his daughter Juliet. I also like the setup of Bridget’s relationship with her sponsor, Malcolm, as the one person she can be “real” with.

One preview showed an extended clip of the final scene, of Siobhan’s phone conversation in Paris (yeah, we knew she wasn’t really dead). Only when I saw the clip, I thought it was Bridget. So that was a bit of a surprise.

So who sent the attacker in the climax? Was it Gemma, the best friend who’d summoned her to the loft? Andrew, whose mysterious phone conversation seemed like he was trying to call off a hit after he’d learned of Siobhan’s pregnancy? Or Siobhan, wanting to put the final nail in the coffin of her fake suicide and get revenge on her sister in one move?

I guess I’ll find out next week.