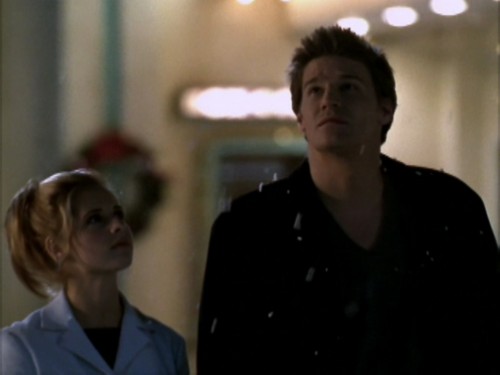 I wondered why the seventh episode of this season wasn’t quite as good as other sevenths, but that was only because Joss Whedon saved his writing and directing talents for this gem of an episode.

After half a dozen episodes of waiting, we finally get a reason for Angel’s return to Earth. The First brought him back to kill Buffy. A notably evil plan, but why Buffy? Was this an earlier indication of things not being right with two Slayers in the world? Wouldn’t another Slayer be called when she died (though there’s no mention that it happens when she does die)? And why Angel? He loves her, so he’ll do whatever he has to to keep her safe. True, he’s one of the few people who would have a chance to beat her in a fight, and he could get close to her, but I think the First would have been better off going with Faith. She could even have her dead Watcher haunting her and urging her on.

The dream flashbacks gave another glimpse of how truly evil Angel was. And how truly awful his hairstyles were. Spike makes fun of his current hairstyle, but those were much, much worse.

Mixed in with the story are Christmasy bits – shopping, school break, lights, decorating the tree. Buffy reaches out to Faith. Willow makes up with Oz:

I just love the sweetness of that. And yes, I know I do go a little Oz-crazy on this blog, but that’s just because I know how soon he’ll be gone from the show.

And the end of the episode, the Christmas miracle, is perfect. Most of the time, snow just brings a cute “aww” moment in a holiday episode of a show. This time, it brings much more:

Angel:  Am I a thing worth saving, huh? Am I a righteous man? The world wants me gone!
Buffy:  What about me? I love you so much… And I tried to make you go away… I killed you and it didn’t help. And I hate it! I hate that it’s so hard… and that you can hurt me so much. I know everything that you did, because you did it to me. Oh, God! I wish that I wished you dead. I don’t. I can’t.
Angel:  Buffy, please. Just this once… let me be strong.
Buffy:  Strong is fighting! It’s hard, and it’s painful, and it’s every day. It’s what we have to do. And we can do it together. But if you’re too much of a coward for that, then burn. If I can’t convince you that you belong in this world, then I don’t know what can. But do *not* expect me to watch. And don’t expect me to mourn for you, because…

And it begins to snow. The sun isn’t coming out. Soft flakes of forgiveness fall, sparing Angel’s life and convince him that he can make amends for the evil he’s done in his past.

Who made it snow in Sunnydale that day? The Powers That Be would best fit in the mythology of the show, though the part they play in the series seems but a dim reflection of the Power Who Is.