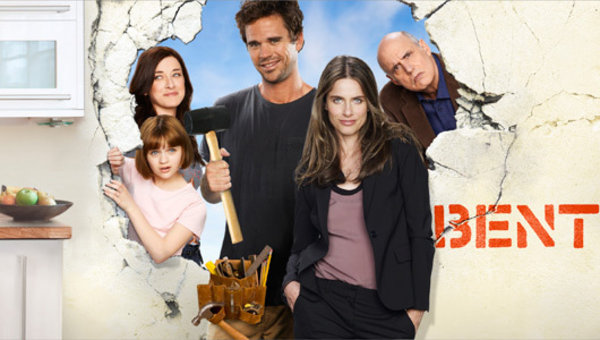 I think I first heard something about NBC’s Bent almost a year ago when the 2011-2012 season pick-ups were announced. I didn’t recognize any of the actors on the show, and the premise sounded bland. An uptight lawyer falling for her contractor? Yawn.

I didn’t come across another word about the show until my brother asked my opinion on it. Surprised that there was a broadcast scripted show I knew nothing about, I looked up a preview trailer. And liked it. The two leads had great chemistry, there was an excellent supporting cast, and there was a perfect balance of wit and situational comedy. And then I got mad.

NBC had utterly failed this show when it came to promotion. If I, someone who kept up with dozens of shows and looked for all the latest news on TV, barely knew this show existed, how would everyone else know? That meant the premiere episodes would rate low. And by airing back-to-back episodes every week, Bent’s abbreviated 6-episode season would only have 2 weeks to build word-of-mouth. The show was doomed before it aired its first episode.

And I was right. The show was everything I hoped it would be – heartfelt, hilarious, zany. The contractor’s father and crew, along with the lawyer’s daughter and sister, rounded out the cast in unexpected ways, creating a “family of misfits” vibe right from the start. Fortunately for me, the show aired at a time when I didn’t have other plans, so I was able to watch every episode live.

But just as I predicted, the ratings were terrible, even by NBC’s standards. This was Free Agents all over again – a badly promoted show with a premise that sounded terrible and gave no hint of the show’s true nature. At least Bent was able to air all its filmed episodes, and the season (and almost certainly series) finale wrapped up a few loose ends to give the show a bit of closure.

2 thoughts on “Bent – Hilarious and Underpromoted”