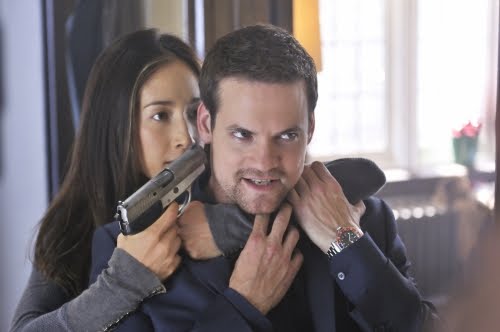 I think it was a Hulu ad that first alerted me to the show Nikita. I wasn’t familiar with any of the previous renderings of the characters and storyline – in fact, I was several episodes in before I realized this wasn’t a brand new show.

The premise of the show intrigued me. A rogue agent taking down a corrupt agency and an undercover agent helping her from the inside. It alone was enough to get me to watch the first episode. I didn’t recognize the actors (the only one I might have noticed in the ad was Shane West), and I generally don’t watch CW shows.

The pilot episode blew me away. Great acting, great plot. Intense action sequences and deep back stories. Intrigue, manipulation, and hidden agendas. And more than that, it filled the missing place I’d had since another show I loved was canceled. That show? Dollhouse.

Before all the Whedonites jump down my throat, let me say that it’s not exactly like Dollhouse or even as good as Dollhouse. There is one Whedon-verse connection on the show, however – Amanda (who channels Adelle from the early episodes of Dollhouse) is played by Melinda Clarke, who also plays Nandi from the Firefly episode Heart of Gold.

Every episode of Nikita delves deeper into the characters. That plus the twisting plotlines makes me feel like I’ve watched the show for two seasons when I’m only 16 episodes (of 22) into the first season.

My favorite character on the show is Michael, played by Shane West. I’d only seen him before on A Walk to Remember, which I’d enjoyed, but not to the point where I looked for him in other movies and shows. After Nikita, however, he moved to my top 20 (if not my top 10) favorite actors. He plays the brooding, conflicted hero so well. And it’s surprising, because he doesn’t seem to have too much that typical “brooding look” many actors do (hint – they’re often cast as vampires). He has to show that brooding in a more subtle and difficult way through his acting.

Maggie Q as Nikita seems a bit cold, but she’s a trained assassin on a mission, so anything else would seem out of place. And that makes her emotional moments all the more poignant.

I only knew Lyndsy Fonseca (who plays Alex, the young undercover agent-in-training) as the daughter in the opening sequences of How I Met Your Mother. Her acting seems slightly overplayed (more dramatic), which works well against Maggie’s underplayed acting.

To round out the cast, you have the power-hungry and manipulative Percy, the poised but lethal Amanda, and the spineless computer genius Birkhoff, plus other recruits, agents, guards, and allies.

To up the show’s pull, episodes end with a final cliffhanging scene that makes you beg for the next episode. This past week’s episode’s was a doozy! And only after watching it did I realize that the show is off the air for 5 whole weeks. I’m going to go crazy! (And yes, that’s why I’m blogging about it now, to keep myself sane as I anticipate the wait!)