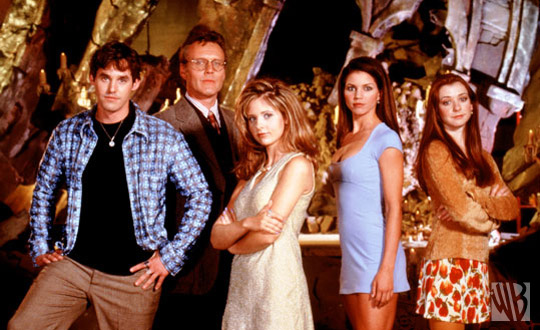 Buffy the Vampire Slayer was my very first introduction to the world of Joss Whedon – and it didn’t capture me. I had heard some good things about the show, so I watched the two-episode opening in August 2008, and thought it a bit campy. Looking back now, I probably should have given it more of a chance, but with my slow internet at home, I could barely watch 4 shows a week over lunch at work. It was also the first time I’d watched anything about vampires, and to be honest, it creeped me out a little.

I didn’t give up on Joss, though. I figured maybe I’d enjoy one of his other shows, so I tried Firefly – and loved it! Less than two weeks after watching the first episode, I’d finished the entire series and the movie. A few days later I watched Dr. Horrible’s Sing-Along Blog, which was also excellent.

I figured that perhaps the high-school cheesiness was what bothered me about Buffy. Maybe the show Angel, which seemed aimed more at twenty-somethings, would be an improvement. Hulu had the entire first season, so I watched it and enjoyed it. Returning fall shows crowded out my viewing time.

By the time Dollhouse came out in early 2009, I had become a rabid Whedon fan, so there was no question of whether or not I’d watch the show. I loved the action, the humor, and the mind-twists it put me through. Seeing a few Firefly actors was also a nice plus.

A year after Dollhouse ended (almost to the day), the combination of three things made me come full circle to retry watching Buffy the Vampire Slayer. One, with the new Hulu Plus, I now had access to all seven seasons of Buffy and all five of Angel. Two, I had a renewed interest in redemptive vampire stories after discovering Being Human.

And three, I realized several actors I didn’t know the first time around were a huge part of Buffy the Vampire Slayer. Of course I “knew” Angel and Cordelia from the first season of Angel, but there were others. I now watched Darla on No Ordinary Family. And Giles I knew as King Uther on Merlin. But the primary reason I tried watching Buffy again? Alyson Hannigan, who plays Willow on Buffy the Vampire Slayer and Lily on How I Met Your Mother.

And I guess second time’s the charm, because I’m on season two and loving it! Yes, it does have its corny moments, and sometimes low-budget special effects (reminds me a bit of Merlin in both ways), but it’s a show with heart and humor.

(Now that I’m thinking about it – there are tons of similarities between the shows Merlin and Buffy the Vampire Slayer. So many, in fact, that I’m shocked that Anthony Head is the only common denominator between the two shows. Not only do they share similar corny moments and special effects, they also have the whole similar “monster/demon/creepy spell of the week” thing. The main characters’ ages are similar, and there’s the whole “forbidden love that is meant to be” aspect. Gaius and Giles play very similar roles advising and doing research in dusty books. And of course, in both shows characters live a double life, hiding their gifts. I’ll probably find even more as I continue watching both shows.)

If you’re not sure you’ll like Buffy, give the show at least 4-5 episodes before you make a final decision. This show grows on you. 🙂