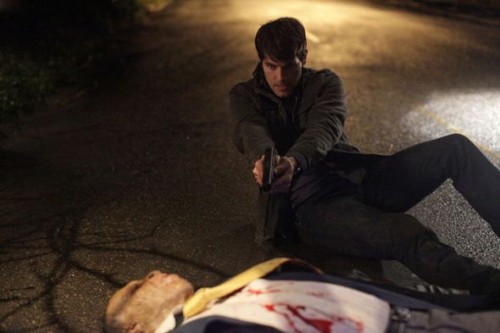 So after the grim news of last week’s cancellations, NBC looks toward the future by announcing its fall lineup. Out of the new shows, The Playboy Club, Whitney, and Up All Night don’t interest me at all based on just the descriptions. I watch so many crime dramas a show needs to offer something unique to catch my attention, and Prime Suspects’ hook about a woman trying to break into the boys’ club of a police precinct makes me yawn.

Grimm, on the other hand, offers a storybook twist – bringing fairy tale villains to the world of crime scenes and witness statements. Does this plug sound at all familiar: “The last of a long line of chosen ones must fight legendary creatures few others know exist while maintaining a normal life and keeping the presence of the creatures a secret”? My mind instantly drew parallels to Buffy the Vampire Slayer, and it’s not surprising that two of the show’s creators helped produce Buffy and Angel. The cast doesn’t have any big names to draw viewers, but hopefully they will bring in some geekdom guest stars. It’s also in the Friday night death slot, but has a decent lead-in show with Chuck. This year’s cancelled supernatural show meets cop drama, The Cape, also followed Chuck. Here’s hoping Grimm will do far better than The Cape (though I’m trying not to get my hopes up, since The Cape had Summer Glau and Monday nights, while Grimm does not). I also would love it if Grimm got a taste of Buffy-inspired humor.

NBC’s other new show, Free Agents, didn’t catch my attention with its premise as a comedy about two coworkers, one recently divorced and the other who lost her fiance, and their fumbling attempts to get back into dating. But their boss is Anthony Stewart Head (Giles from Buffy the Vampire Slayer and King Uther from Merlin)! The previews confirmed that he keeps his accent, and there was even a brief mention of Sarah Michelle Gellar in one, which tipped the show into “definitely watch the pilot” territory. And since I lost one NBC workplace comedy with the cancellation of Outsourced, it seems only fitting that NBC should provide another.

The unscheduled pickup, Awake, also looks good. Jason Isaacs plays a man caught between two alternate realities. In one, his wife died in a car accident. In the other, it was his son who died in the accident.

In addition to dumping Chuck and Grimm onto Friday nights, NBC made another schedule error by keeping Thursday nights annoying and choppy. They kept Community at 8, which will conflict with The Big Bang Theory if CBS keeps it at the same time, and then plunked Parks and Recreation between it and The Office. I hate half-hour gaps of shows I don’t like between shows I like. But at least they’re providing some worthy substitutes for the shows they axed.