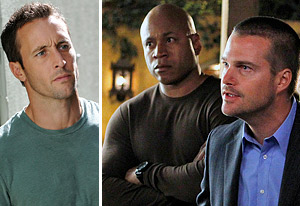 Hmm, something that may finally get me to watch Hawaii Five-O! It airs at the same time as Castle, so I’ve rather been rooting for its demise, even though it seems like a decent show. The one episode I caught during the middle of season one didn’t wow me, and while several of the show’s actors are familiar, none were favorites. And I had plenty of cop shows to keep me busy anyway.

Finding out one of the show’s villains is played by James Marsters sparked my interest in the show again, but I couldn’t justify trying to squeeze in another show for only a reoccurring guest. But since the crossover in question doesn’t happen until May, maybe I will have time to catch up with the season and a half of Hawaii Five-O that has aired so far.

At least I now know what Kensi’s mysterious Hawaii trip was about!