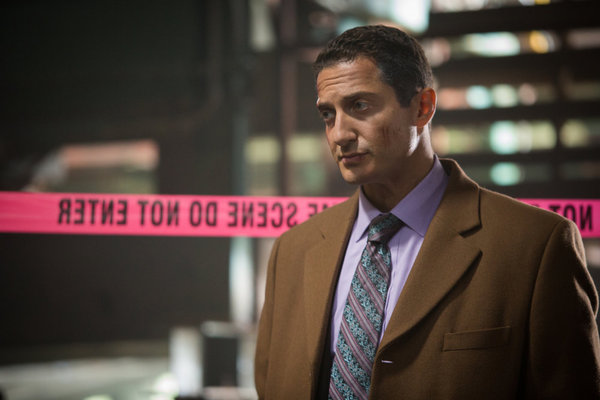 The episode picks up with Nick’s fight with the Mauvais Dentes. He shoots at it but misses. It feels like a regression – Nick back to using a gun after the ancient weapons training he’s done. He really didn’t have time to go back to the trailer and get one, though, with the FBI agent in danger. Still, I think it’s high time he stashed a few in his truck.

Kelly Burkhardt joins the fight. Was I the only one who noticed both she and Nick fought the Mauvais Dentes kind of Buffy-style? Lots of punching and kicking and grunting. After defeating the creature, but getting no answer as to who sent him, they head to the hospital to help Juliette.

The whole potion thing seems a little hokey to me, but I think that’s because it seems to be formulated specifically for the plot of these two episodes. When do we want Nick to fight the Mauvais Dentes? The afternoon after he fights Kimura. Okay, let’s make the potion need sixteen hours to create. What’s a reasonable time for a fight and a drive to the hospital? Okay, let’s make the potion expire in 45 minutes. Wait, Nick should be freaked out by Juliette’s black eyes. Let’s make the potion have to go in her eyes. And what sort of an arbitrary measurement is 6 drops in each eye? It’s a) hard to get accurate, and b) wouldn’t the later drops spill out anyway?

Catherine’s potion for Renard seemed much more reasonable – no hoops to jump through and a consistency that was played for laughs. The pain it brought made the result seem fairly won and not cheap. I’m curious to see what lingering affects it will have. But if Rosalee figured out what potion Catherine wanted to make with the ingredients, why didn’t she just make that potion herself, instead of going for the memory-loss-preventing one? It seems weird that she’d have enough of the recipe to recognize it, but not enough to make it herself.

I love the scenes with Nick’s mom and Monroe, but Rosalee kind of seemed out of place for most of them. She’s kind of the newbie to the gang, so her taking on the lead role of explaining why Nick and Monroe work well together seems like overstepping. I hope making Rosalee a main cast member doesn’t hurt the show in the long run, especially since the Nick and Monroe duo is what made Grimm great.

The whole thing with the FBI and the bullet should make Nick more likely to rely on ancient weapons. The phone call was easy enough to explain away, but I didn’t think throwing away the gun would work. Wouldn’t the FBI know Nick had two registered weapons? Isn’t there a big hubbub if a cop loses a gun? And getting the DNA on the hair found at the scene should have taken a longer time, but that’s a common problem in crime shows. It’s actually more feasible for the time to be sped up in this case, with two FBI agents dead. I did think that one of the new FBI agents would turn out to be Wesen, but no. Hank is getting suspicious, and his conversation with Nick sets up the next episode well (at least with what I’ve seen from the promos).

The fight of the two moms (Kelly and Catherine) was pretty awesome – how many shows have a battle to the death between two fifty-ish women? I’m starting to like Nick’s mom more and more.

My favorite part of the episode was the reveal that Captain Renard is half hexenbiest. Catherine’s comments that he was “barely human” and “a bastard . . . literally” set the stage for Renard to Woge for the first time that we’ve seen. It’s amazing that Renard has been able to keep his true self a secret from Nick for so long, without accidentally morphing in front of him. However, he did seem to have more difficulty doing so than most Wesen, so being only half Wesen may help him control it.

Additional thoughts: Renard seems to both love and hate his hexenbiest side. Hexenbiests seem to be his main allies in Portland, and when Adalind is no longer one, he calls her “just a pretty girl.” Yet he clearly hides that part of himself. I wonder how Catherine knew – did she used to be an old friend of his mother’s? If he wanted to be fully human, all he needs is a little of Nick’s blood, but he hasn’t gone that route.

I like how the show made the parallel between Kelly leaving Nick for his own protection (and how she regretted that choice) and Nick wanting Juliette in his life despite the danger. But things are still not on the up-and-up with Mrs. Burkhardt – as she had Nick drive her to the station, but as soon as he drove away, she stole a car instead.

Looking forward to the next episodes, and the implications of Renard waking Juliette with a kiss, Juliette not remembering Nick (as foreshadowed by the creepy way he disappeared in her mind last week), and lingering effects of the “purity of heart” potion.