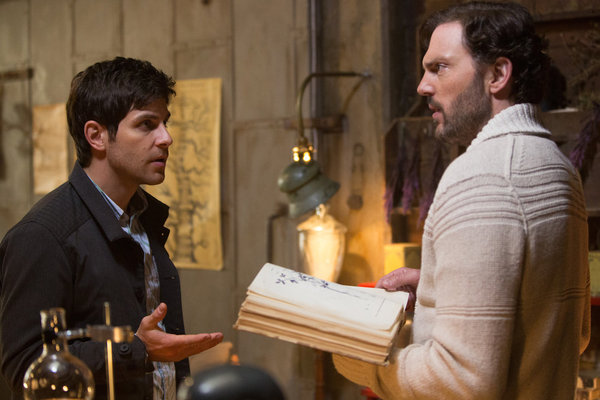 This week’s episode was unusual in that it opened mid-case, with Nick struggling to get some sleep on the couch while dealing with an intense missing-persons case.

Nick and Hank get a break on the case when they show up at the house of someone who worked in the same building – just as he’s burning photos of the girl. Nick gets a quick peek at the photos before they turn to ash, but without evidence, they can’t hold the guy, who happens to be a Wesen. Recognizing that Nick’s a Grimm, the suspect loudly accuses Nick of planning to kill him. When Nick later shows up at the suspect’s house to get answers (with, thanks to Monroe, truth-serum-coated arrows), he finds the man dead, with marks of torture and peculiar brands. A 911 call made during the torture has him confessing to the crime and revealing the girl’s location.

The police release the brand symbol to the public, hoping someone can identify it, and both Bud and Monroe recognize it and call Nick. It’s an old German “G”, and a symbol of Endezeichen Grimms – extremist Grimms who kill all Wesen and brand them with the mark. (Glad that Monroe finally go more than one scene – however brief – with Nick in an episode!)

The cops track down the van used to kidnap the girl and arrest the owner. Nick and Hank aren’t able to get very far with interrogating him, as he’s also Wesen, and thinks that Nick is going to kill him. He then vanishes from the station and turns up dead and branded at his house.

The Endezeichen Grimm starts calling Nick (with a voice modifier), scolding him for not doing his job as a Grimm. Bud visits the precinct to tell Nick that the Wesen are getting very nervous about these attacks – some still trust Nick, but others think he could be behind them. After reviewing security cam footage, Sgt. Wu is able to catch a glimpse of the person who let the second kidnapper escape. Nick and Hank rush to save Bud.

It was kind of obvious the culprit was the new intern – especially when the suspect disappeared from the police station. I was a bit disappointed that Michael Grant Terry’s arc ended so soon (and seeing something online talking about the same thing was a bit of a spoiler to his identity). I found it very interesting that he wasn’t even a real Grimm, but a Lebensauger, hating his own kind enough to torture and kill any Wesen he finds.

On the Juliette/Renard side of things, Juliette has apparently taken Pilar’s words (from the previous episode) to heart, as she’s trying to find Adalind, whose cat scratched her, but is having no luck. Renard calls her, wanting to talk about Nick being under stress, and they agree to meet for coffee. They only talk briefly before Juliette is spooked by Renard touching her hand, and she leaves her sunglasses behind. When he comes to return them, Renard surprises both himself and Juliette by kissing her. As he does, she remembers that he kissed her to wake her up from the coma, and hurriedly breaks away and shuts the door.

It’s good to finally be getting some movement on that front, especially with the fall finale only two episodes away! In all, I thought this was a great episode, and I’m glad the show keeps portraying all these different sides to Nick being both a Grimm and a cop.