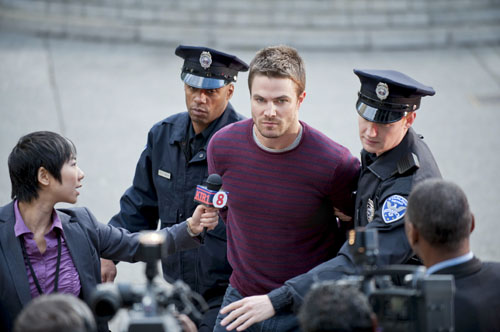 After several insane episodes and a crazy cliffhanger on the last one, I knew Arrow would have to slow down the pace at some point, and this episode was it. But it still was filled with many awesome character moments, even if the coolest action scenes took place 5 years ago on the island.

And the island is where this episode started, even though I was dying to find out what would happen after Oliver’s arrest last episode. Oliver steps away for one minute from his island mentor (to retrieve his first poorly-shot arrow – cool that we got to see that) and is captured. He’s questioned by an officer and answers honestly, until the man pulls out a photo of his mentor in military dress and asks if Oliver’s seen him and where he is. Oliver lies (badly), and keeps up the charade of not knowing the guy, even when Deathstroke shows up and starts torturing him. I’m not sure how long it’s been since the shipwreck (Oliver’s hair still looks mostly the same, so I’m guessing only a few weeks), but that’s an amazing amount of loyalty to show for a guy who shot an arrow through your chest. The mentor comes in and rescues Oliver (with a cool fight with Deathstroke) just as the bad guys decide he probably doesn’t know anything and can be killed. The archer is suitably impressed by Oliver not ratting him out, and says there’s more to Oliver than he thought.

The flashbacks neatly parallel Oliver’s present-day arrest and interrogation. He claims he just saw the bag and took it, and that Quentin just has a personal vendetta against him. He asks his mother to request Laurel as his lawyer. Laurel at first refuses, but shows up at his arraignment and gets him out on bail, with a tracking anklet.

Diggle is freaking out (in his calm way) about the arrest, but Oliver tells him he knew about the security camera and was planning to get arrested. The timing of Arrow’s appearance with his return would eventually lead people to figure out who he was, so better to remove himself as a suspect now. To clear his name, he has a plan – let Dig dress up as Arrow and stop an arms dealer while Oliver hosts a “prison party” with plenty of witnesses. It was so fun watching Dig explore all of the cool gadgets in Oliver’s lair!

Oliver and Laurel meet with Quentin and the prosecutor, who offers an insanity plea deal based on Oliver being on the island for so long. Oliver refuses, saying he wants to take a polygraph and convince Quentin of his innocence. The polygraph scene was one of my favorites in the episode, especially since we got to see Laurel’s reaction to Oliver’s answers. Oliver tells Quentin he’s not the vigilante and lies about a few other things surrounding that, but is able to act like he’s telling the truth. Quentin then confronts him with discrepancy between his scars and being alone on the island, and Oliver confesses that he wasn’t alone, but he didn’t want to talk about it, because the people there tortured him. When Quentin asks if he’s killed anyone, Oliver says yes – “Your daughter, Sarah, because I invited her onto my boat.”

Before the party, Thea questions Oliver about the arrowhead he brought back for her, thinking that indicates he’s really the vigilante. Oliver assures her he isn’t, and lies and says he got the arrowhead at an airport gift shop. Meanwhile, their mom and stepdad are dealing with their own issues. Moira assures unnamed-dude-played-by-John-Barrowman (I’ve finally gotten to a few of his episodes on Doctor Who, so I can now see why people are excited that he’s on the show! Also, if they’re going to all this trouble to hide his name, I’m guessing he’ll end up being a significant character from the comics?) that Oliver has been falsely accused. Walter has his head of security move the damaged boat to a different warehouse, but the man turns up dead.

Laurel shows up at the party to apologize for her father. I’ve only been able to pick up a little about the Black Canary from people talking about the comics, but there appears to be two references in this scene. One, she mentions annoying fishnets in one of her Halloween costumes, which are part of the Black Canary’s traditional attire. Two, she talks about how after Sarah died, she and her father retreated to the law while her mother didn’t. In the comics, her mom is the original Black Canary – could this be a hint that the show plans to include that?

Those who were complaining about the chemistry between Stephen Amell and Katie Cassidy in the pilot should really watch this scene and the one a little later on. I’m so glad to be right that it would get better (since I’d seen the spark they shared during interviews)! The mix of anger, feigned indifference, attraction, friendship, and sadness Laurel is supposed to feel at any given moment toward Oliver must be a struggle to get right.

Laurel admits, in all her mourning for Sarah, she didn’t think about what Oliver went through on the island. She asks to see his scars and they kiss for a few moments before she bolts out of the room. Diggle calls to report scaring off the bad guys, and Oliver is interrupted by a man, dressed as staff for the party, knocking on his door. He opens it and the man tries to shoot him. They fight, and in the middle Quentin comes in and shoots the guy.

Walter confronts Moira with knowledge of the ship and seems to think she’s behind the head of security’s death. We don’t see the end of their conversation. It’s not clear whether it was interrupted by news of the attack on Oliver, but in a later scene, Walter informs Moira that he’s leaving on an extended business trip to Australia.

Quentin explains that the fight knocked Oliver’s anklet loose, which is why he came up to check on him. Also, he says several witnesses spotted Arrow in another part of town, so he removes the anklet completely and says they’ll be dropping the charges. He doesn’t know who Oliver’s attacker was, but Moira insists that it’s Quentin’s fault for arresting Oliver publicly and putting a target on his back for everyone angry with the vigilante. Oliver thanks Quentin for saving his life.

Moira goes to John Barrowman, and it’s pretty clear he’s calling the shots (so I might have been wrong about Moira being coldblooded – perhaps she found out about the sabotaged boat after the fact? I couldn’t find an exact quote of the earlier conversation). He was the one who killed the head of security and tried to have Oliver killed. Moira tells him she’s been a “good soldier” (is he blackmailing her to keep the same arrangement he had with her late husband?), but, “if any member of my family so much as gets a paper cut, I will burn your entire world to ashes.”

Laurel comes to Oliver with the final polygraph results. There’s a slight waver on the question about whether he’d ever been at the prison (where he rescued Laurel), and she wonders if he remembered their field trip there as teens, or if he’s able to lie well enough to beat a polygraph. Oliver tells her he doesn’t want people to view him as damaged, but he doesn’t sleep, he barely eats, and he can hardly sign his own name – how could he wield a bow and arrow? She tells him that they’re still obviously attracted to each other, but they can never be together. (Cue seasons-long will they/won’t they drama.)

Dig is upset that Oliver’s lying to everyone so easily, and wonders if he really thought through this aspect of his mission – deceiving every one he cares about. Oliver assures him that he thinks about it every day – and heads to take out the arms dealer, who didn’t heed Diggle’s warning. But I’m guessing both Laurel and Thea still aren’t fully convinced that Oliver isn’t Arrow. It’s going to be a lot harder for him to tell anyone else now – it’s one thing to have a secret identity, it’s another to outright deny accusations and purposely mislead, and those who find out will have to get over feeling somewhat betrayed first.

As I said, this was a great episode, even if it lacked jaw-dropping moments like the previous ones had. I’m sad to see Walter go (for a bit at least) – I liked his character more than I expected. I missed Felicity in this episode, and we’ve seen far too little of Tommy lately.

What are your thoughts on the episode?

One thought on “Arrow – Damaged”