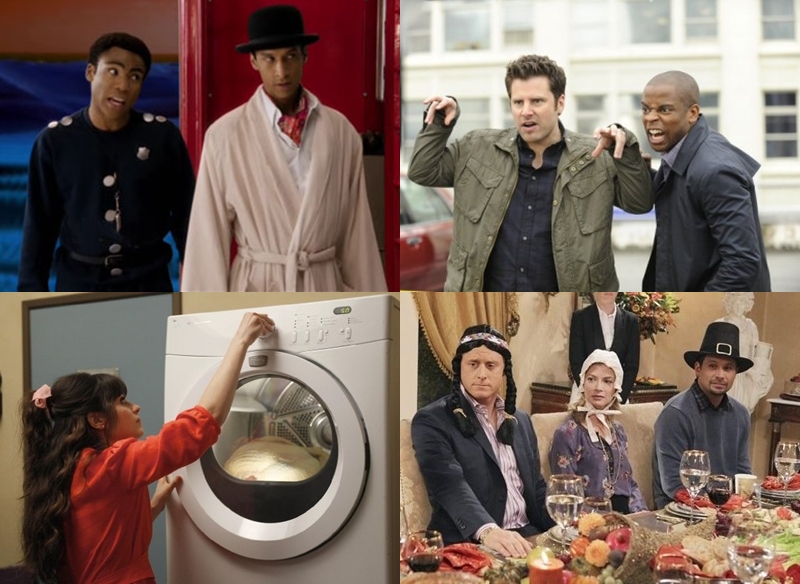 I just made a list of all the shows I’m behind on (it’s getting to be quite a few), but I quickly realized there is one type of show I haven’t put off watching – comedies! Of course, their usual 20-minute length makes them a bit more compatible with a busy schedule than a 45-minute show, but I believe it’s also because I’ve been in the mood to laugh.

I posted about the new fall comedies already, but that was two months ago, and didn’t include shows that premiered in previous years. Out of the new shows, two have already been canceled – the so-so How to Be a Gentleman, and the adorably zany Free Agents. I didn’t really mind the cancellation of the former, but Free Agents had gone from “I’ll check it out” to one of my favorite new shows within only 3 episodes. But lackluster pilot reviews, no advertising, and strong competition resulted in poor ratings, and the show was decapitated in infancy. I really hope the unaired episodes will become available at some point.

The How I Met Your Mother gang is as funny as always, and this season has managed to throw in a few surprises. I’m not sold on Kevin’s (House’s Kal Penn) addition to the group, but having a therapist amid such an insane group has made for some funny moments. I am ready for the show to return some of the focus to Ted, though.

2 Broke Girls has continued to be hilarious, and has been picked up for a full season (and with its ratings, renewal is almost certain). I’d expected things with Johnny to progress differently, but it led to hysterical moments, like getting rid of the cupcakes so they could leave a fancy party – by hiding them in their clothes.

New Girl has gotten a lot better – less singing, more outrageous moments (like thawing a turkey in a dryer), and hilariously awkward scenes. I still have too much going on at 9PM to watch it live, but I catch up on Hulu. It also has a full season pickup and strong renewal chances.

Suburgatory makes the week 3 for 3 so far with new strong female comedies that have great ratings and full season orders (interesting that they’re on 3 different days on 3 different channels). This show is crazy, outlandish, and fun. (Seeing Alan Tudyk in black braids? Priceless.)

I usually lump Psych in with crime dramas instead of comedies, but this season has been so hilarious so far, I couldn’t resist including it. The strongly-themed episodes have been amazing so far – whether Shawn and Gus have been hunting vampires (with actors from both the movie and TV show versions of Buffy the Vampire Slayer), putting the pieces together after an insane night (a la The Hangover), or going undercover in a mental hospital.

While Psych seems to be becoming more episodic, The Big Bang Theory seems to be making its episodes more connected, and I’m still waiting for the other shoe to fall from one of the dangling plot threads. This season has had a few more groan-worthy moments than usual, but it still makes me laugh each week.

“Inspector Spacetime” alone has made Community extra fun this season, and I’m loving the overdose of Troy/Abed moments. I hate that NBC is replacing it during the mid-season, but maybe they’ll finally wise up and quit making the show compete with The Big Bang Theory. But one piece of good news: Community was voted TV Guide’s Fan Favorite show, and won a place on the cover of the guide!

I’m loving Andy as the new boss of The Office, but why does Robert California have to pop up in every episode? As much as I hate him, I can see that things might become too “easy” without his character, yet he shouldn’t be in all the episodes, or even every other one.

I usually count Chuck as an action show, but Morgan, Awesome, Jeff and Lester, and even Casey have been making this season more hilarious. Too bad there are only 9 episodes left before the show is over for good.