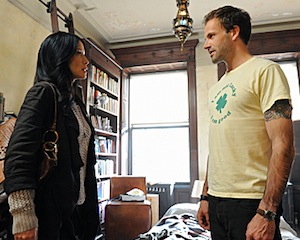 Yay! I’m so glad Elementary is going the friendship route for its unconventional Holmes/Watson pairing. It’s so much more true to the original stories. We already have great “will they or won’t they” crime-solving shows like Castle and Bones – Elementary needs to be different. And having the main guy/girl duo of a show being just friends is rare on TV today. The only current show I know of with that type of guy/girl friendship for the two most prominent characters is Warehouse 13, with Pete and Myka. (I’m sure there are others.)

And this isn’t just speculation, it comes straight from the top:

“For me, it’s completely off the table,” Elementary showrunner Rob Doherty told TVLine. “It’s just not in my head for Season 1 and, looking ahead . . . I just don’t feel like that’s a part of the show.”

He added, “People will ask us every week, and there will be people who want to see it happen, and I don’t want to break any hearts but it’s just not in our plans. And I have felt no pressure [from higher-ups] to pursue that kind of storyline.” 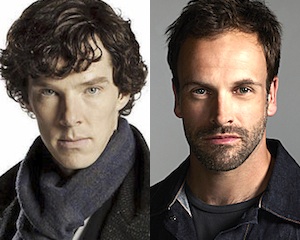 Also, Sherlock star Benedict Cumberbatch finally broke his silence about the show that many are claiming is clearly a ripoff of his own. “I wish them luck, I really do. I think it will be great. It will be a different spin on it, because obviously, theirs is modern-day as well, so it needs to be different from ours, and I think the more differences, the better, to be honest.”

He added, “I don’t see why they shouldn’t co-exist with us, I don’t think they’ll steal our audience. I think people who are Holmes fans who think they do a good job of it will have a treat in watching ours and the films. So I wish them good luck!”

Elementary on CBS: No Sexual Tension for Sherlock and Watson – TVLine.