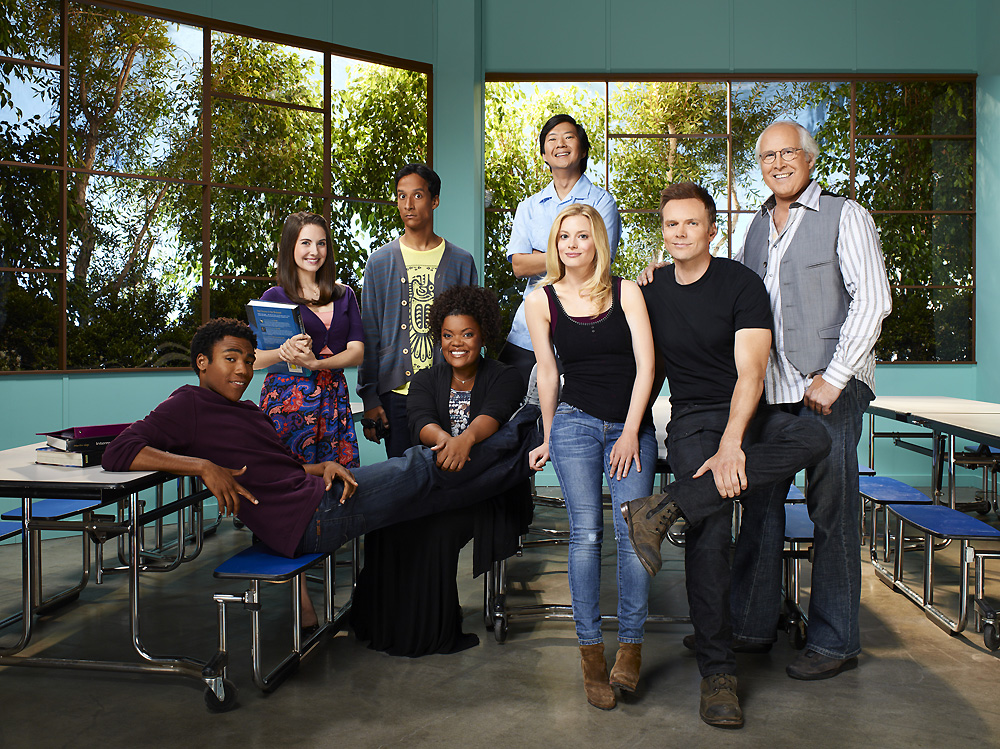 This month, I’m giving away a season of Community! Winner will receive his or her choice of either a season DVD set of the show (season one or two) or a $15 Amazon gift card! See rules below for how to enter by leaving comments, sharing on Facebook, linking on Twitter, and more!

Easy-peasy rules (more details and ways to win below, but if you want to enter and move on, this is what you need to know): Leave a comment, get an entry. Post link to this page on Facebook, get entries. Post link on Twitter, get entries. Simple as that.

And the winner of last month’s Bones giveaway was Emerson Graham! He chose a $15 Amazon gift card as his prize.

Community follows 7 unlikely study group partners (plus Senor Chang, their first year Spanish teacher, and the school’s dean) along their zany adventures at Greendale Community College. Whether they’re trying to survive a paintball war, filming an out-of-control documentary, or participating in outrageous class projects and school events, the show is never boring.

Fans of the show grew upset when NBC removed Community from its mid-season schedule. Though the network has insisted it will return, fans have responded with a renewed vigor to promote the show. It recently won TV Guide’s Fan Favorite contest, and people have been adding felt goatees from the dark timeline (based on this season’s episode “Remedial Chaos Theory”) to profile pictures.

In the spirit of unique promotion, and because characters on the show use Twitter regularly (tweets sent during the episode show up on real accounts while the episode is airing, most notably in the episode “Studies in Modern Movement”), this month I’m going to do a special Twitter promotion. If you can help me raise my Twitter followers to 750 (currently 569) by the end of December, I’ll give away BOTH seasons of Community to the winner! (Or a $25 gift card if they prefer.) My Twitter handle is @waterfallbooks. If we reach that goal early in the month, I’ll see about adding another prize tier!

Not only that, but you’ll get additional entries to the giveaway while you help me increase my followers. As usual, you get entries for tweeting about the contest (bumped up to 10 for the first time, 1 additional entry for every day after that). Please remember to email me (katie at tvbreakroom dot com) about it so I’ll know you tweeted! You’ll also get one entry every day you mention @waterfallbooks in a tweet. And yes, you can link to this contest and mention me in the same tweet, which will give you 11 entries the first time, and 2 every time after that. Retweeting one of my own tweets will also give you a point a day (done by clicking the Retweet button on Twitter, so that my profile pic comes up in your news feed – otherwise, it gets counted as a mention). Those three methods alone can give you around 100 entries during December!

But that’s not all! If you get someone to follow me, and they mention you sent them, you’ll get 10 entries! Each and every time! I’ll keep track of these as well as comments, and add them to your emailed promotional total.

One final way to enter via Twitter – change your profile picture or background to promote Community, and you’ll get 20 entries! You must keep it up for at least a week to count, and let me know about it.

To enter this month’s giveaway (the typical way):

Leave a comment on any blog post on this website. Your comment should add to the discussion (at least several sentences is good), and be relevant to the post’s subject. For example, you can comment on this post about what you love about Community, what sort of giveaways you’d enjoy in the future, or debate the chances of the show being renewed. Any posts flagged as spam will not qualify (though I plan to scan through them to make sure all real comments get through). Every post you leave a comment on will count as one entry. If you leave relevant comments on 50 posts, you will get 50 entries.

Linking to this contest on your blog, Facebook, Twitter, or Google+ will give you 10 extra entries the first time, and 1 extra entry per day after that.

If you have other ideas for promoting this giveaway, feel free to use them, and I’ll award entries accordingly. The more creative/effecting the promotion, the more entries, you’ll receive!

To receive your additional entries for promoting this contest, email me at katie at tvbreakroom dot com to let me know what promotion you did. Please email! It makes it so much easier to figure out what promotion was done.

Winner will be chosen at random (using Random.org) from all eligible entries received.

Open to everyone 16 or older with a valid email and mailing address. A winner residing outside the US may have to pay an additional fee for shipping. (Feel free to select an e-gift card instead!)

Winner must provide a way to contact (email or website/facebook/twitter with some means of contact) and respond to winning notification within 3 days or prize may be awarded to someone else.

What counts as a relevant comment will be at my sole discretion. Comments should be made in English. You may leave as many comments per day as you wish, but only one comment per blog post will be counted as an entry for the contest.

These rules may change at my discretion.