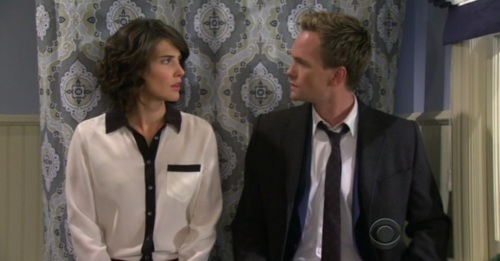 The beginning of this episode made me gasp. I decided about halfway through it that it was amazing. And the ending simply blew me away, earning it a perpetual place in my top 10 favorite How I Met Your Mother episodes.

Plenty of spoilers below, so please, go and watch the episode if you haven’t yet already. Then come back. Even you people who like to read the end of books first. (Especially you people.)

The action picks up right where the last episode ended – Robin telling Barney she’s pregnant. Only that isn’t the opening scene of the episode. The episode opens to two teens (one blond, one brunette) sitting on couch, while Robin’s voice says, “Kids, have I ever told you the story of how I met your father?” If I had been eating something, I’m sure I would have choked on it at that moment. I’d heard that Robin was going to have her own “future opening scene,” even knew that they were having casting calls for a blond teen to play her son, but I had no idea that it was coming up this soon, on top of the bombshell of the past episode.

The kids shake their heads. “Well, I’ll just skip ahead to the moment I told him I was pregnant,” future Robin says, and we’re back to the bathroom scene. I could almost hear the Barney/Robin shippers squealing with joy. Barney is the father of Robin’s kids? Since I’d seen the next minute as a sneak peek for the episode, my mind was free to wander. It all seemed to make perfect sense. Future Ted started the story with meeting Robin, so it made sense for her to be the bride at the wedding where Ted meets his future wife. And I simply love Barney and Robin together.

But back to the scene. After Robin knocks Barney out twice for inappropriate comments, she tells him he’s the father. I love his response: “That’s wonderful! I’m going to be a daddy!” And Robin’s fainting at that was hilarious.

The B-story with Marshall and the neighbor kid was a little lame, though the twist of heartwarming moment to Marshall getting ripped off made a nice contrast to the rest of the episode. And it tied in well with the ending.

Barney and Robin’s trip with Lily to a baby boutique and meeting an old friend of Barney’s only strengthened Robin’s desire not to have kids, and made Barney change his mind. My favorite part was Robin’s “Sorry, kids,” which also came after Barney and Robin’s dance of joy upon finding out she wasn’t pregnant. It did feel like a bit of a cop out to renege on last episode’s big reveal, but to be fair, Robin said she was only a week late.

When the doctor called, I thought for sure Robin was really pregnant (why would she be telling her kids this story, otherwise? Though of course, why has Ted spent seven seasons telling his kids similar stories?). I was floored when the real reason for a second visit to the doctor’s was revealed – Robin can’t have kids.

I love how she predicted each of her friends’ reactions to the news, though the pole vaulting thing got a little ridiculous. And it was so sad, watching her try to hold things together without revealing the truth. Barney’s guilty faces were hilarious, though, as Ted and Lily tried to figure out what was wrong with Robin.

And of course Ted kept pushing to know what was bothering Robin so he could cheer her up (plus a last-minute plane ticket near Christmas can’t have been cheap), and of course Robin refused.

Her walk alone through NYC, as she reasons why it’s better for her to not have kids, was somber, but what broke my heart was the final reveal. Robin says to the kids in front of her, “If you want to know the truth of it, I’m glad you guys aren’t real.” And they faded away, and the room faded away, and last of all the couch disappeared into the snowy December night. Robin swallowed the final bit of her eggnog, and walked home.

Up until that moment, I’d held out hope. Maybe the doctor was wrong. Maybe Robin and Barney adopted. But no. Robin was saying goodbye to the kids she would never have, and nothing in the How I Met Your Mother world seemed certain anymore.

But then came Ted’s light display and comforting hug as Robin let herself cry. And one thing became certain again. These five friends could weather any storm, as long as none of them faced it alone.

One thought on “How I Met Your Mother – Symphony of Illumination”