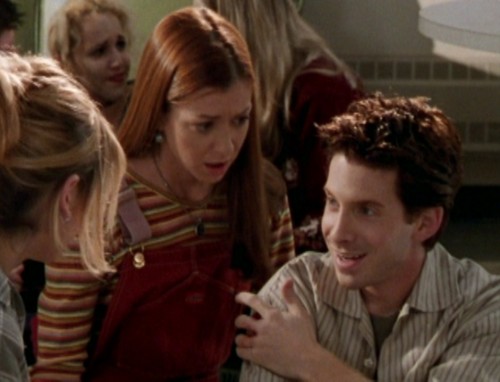 This first episode of a pivotal two-parter sets up the story well. Buffy is feeling depressed about Career Week, since her future vocation is already set.

Buffy:  Y’know, if you don’t like the way I’m doing my job, why don’t you find somebody else? Oh, that’s right, there can only be one. As long as I’m alive, there is no one else. Well, there you go! I don’t have to be the Slayer. I could be dead.
Giles:  That wasn’t terribly funny. You notice I don’t laugh.
Buffy:  Wouldn’t be much of a change. Either way I’m bored, constricted, I never get to shop, and my hair and fingernails still continue to grow. So really, when you think about it, what’s the diff?

Spike, Dru, and the book stolen in “Lie to Me” come to the forefront as Spike tries to find a cure for Drusilla. Spike is getting tired of the Slayer messing up his plans, so he sends an order of deadly assassins after her. I loved the way the episode sets it up so that Kendra looks like one of them at first.

Angel taking Buffy ice skating was a sweet gesture, and provided another opportunity to show Buffy’s resourcefulness with death by ice skate. Oz is back in this episode, and it’s the first time we see Willy (a bartender who caters to demons and the undead and tends to get beat up for information a lot). It’s also the first time the group gets its most prominent moniker:

Xander:  C’mon, Cordelia. You wanna be a member of the Scooby Gang you gotta be willing to be inconvenienced every now and then.
Cordelia:  Oh, right, ’cause I lie awake at night hoping you tweakos will be my best friends.

Xander and Cordelia’s retreat to the basement after fleeing the maggot assassin leads to their first kiss of mutual hatred:

Xander:  What, is he supposed to have an arrow with the word ‘assassin’ over his head?! All it took was the prospect of a free makeover, and you licked his hand like a big, dumb dog!
Cordelia:  You know what? I’m going. I’d rather be worm food than look at *your* pathetic face!
Xander:  Then go! I’m not stopping ya!
Cordelia:  I bet you wouldn’t! I bet you’d let a girl go off to her doom all by herself!
Xander:  Not just any girl. You’re special.
Cordelia:  I can’t believe that I’m stuck spending what will probably be my last few moments on Earth here WITH YOU!
Xander:  I *hope* these are my last few moments! Three more seconds with you, and I’m gonna…
Cordelia:  I’m gonna what? Coward!
Xander:  Moron!
Cordelia:  I hate you!
Xander:  I hate you!
(They kiss passionately.)
Xander:  We *so* need to get outta here.

Buffy takes Kendra back to Giles, and we begin to find out just how unorthodox a Slayer Buffy really is. Though the explanation of why there are two Slayers brought to mind something that’s been bugging me since season six – why wasn’t there another Slayer activated at the end of season five? Did we just not hear about her? Did the fact that the death was mystical cause the activation not to occur (if that’s the case, I find it pretty hard to believe that not a single Slayer over the centuries died in a somewhat supernatural way)?

We finally get some Oz/Willow sparkage, with Oz even taking a bullet as he knocks Willow out of danger. I think they’re the cutest couple of the entire Buffyverse. I love their conversation at the end of the episode:

Oz:  Oh, hey! (offers the box) Animal cracker?
Willow:  No, thank you. How’s your arm?
Oz:  Suddenly painless.
Willow:  You can still play the guitar okay?
Oz:  Oh, not well, but not worse.
Willow:  Y’know, I never really thanked you.
Oz:  Ooo, yeah, please don’t. I don’t do thanks. I get all red. Have to bail. It’s not pretty.
Willow:  Well, then forget that thing. Especially with the part where I kind of owe you my life.
Oz:  (pulls out a cookie and stops) Oh, look! Monkey! And he has a little hat. And little pants.
Willow:  (smiles) Yeah, I-I see!
Oz:  The monkey’s the only cookie animal that gets to wear clothes, you know that? You have the sweetest smile I’ve ever seen. So, I’m wondering, do the other cookie animals feel sorta ripped? Like, is the hippo going, ‘Hey, man, where are *my* pants? I have my hippo dignity!’
(Willow laughs.)
Oz:  And you know the monkey’s just, (with a French accent) ‘I mock you with my monkey pants!’ And there’s a big coup in the zoo.
Willow:  The monkey is French?
Oz:  All monkeys are French. You didn’t know that?

We also get some hints of the past (and future) Angel/Drusilla/Spike love triangle, and Spike’s jealousy of Angel, which will play a major role in the final episode of the season. This two-part episode also shows that Spike’s obsession with killing the Slayer is growing, but as with Xander and Cordelia, seething hatred seems only a step away from passion.

Spike:  I’d rather be fightin’ you anyway.
Buffy:  Mutual.

Each had opportunity to finish each other off in this episode, but instead went to rescue Angel/Drusilla. And Buffy’s parting blow was to be the end of Spike according to the original plan, but the writers decided to keep him around. It’s also in this episode that we get a glimpse of Drusilla’s darkness and the part it will play in the future.