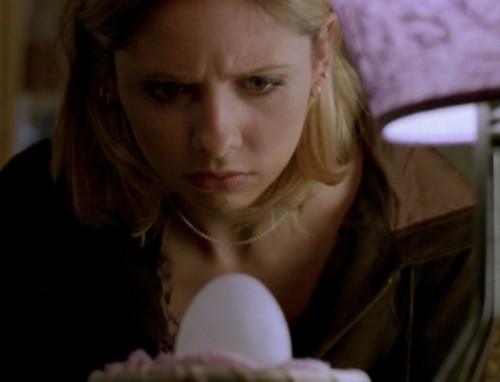 These two standalone episodes are sandwiched in between two important double-parters, and I wasn’t looking forward to rewatching them. But they surprised me, especially the first one.

I enjoyed this episode the second time through more than the first watching. Knowing what Ted truly was made him easier to stomach. It was interesting comparing Buffy’s reaction to having (as far as she knew) killed a human being to Faith’s in season three. And this episode was a fun precursor to season five’s robotics. Though I had to smile at Willow’s brand new 9-gig hard drive.

“Ted” also reminded me of season four’s “Living Conditions,” where Buffy “knows” that a new annoying person in her life is evil, while everyone else thinks she’s crazy.

Buffy:  Vampires are creeps.
Giles:  Yes, that’s why one slays them.
Buffy:  I mean, people are perfectly happy getting along, and then vampires come, and they run around and they kill people, and they take over your whole house, they start making these stupid little mini pizzas, and everyone’s like, ‘I like your mini pizzas,’ but I’m telling you, I am…
Giles:  Uh, Buffy! I believe the subtext here is rapidly becoming text. Are you sure there’s nothing you want to share?

Cordelia seems to have settled into the Scooby Gang, without a bit of whining about helping out. And is it just me, or did the shop they investigate look a lot like the set of the Magic Box?

My favorite part of this episode was Giles and Jenny making up in a rather awkward but sweet fashion. Their scenes have added poignancy since I know what’s coming.

A rather bland monster-of-the-week episode, with one standout aspect being probably more kissing than any other episode of the show.

Xander:  Apparently Buffy has decided the problem with the English language is all those pesky words. You… Angel… big… smoochies?
Buffy:  Shut… up.

The highlight of the episode was the introduction of the vampire cowboys, Lyle and Tector Gorch, second to only Spike and Dru for a hilarious twosome of vampires. Though I do find it a bit hard to believe they survived a whole century as vampires with their intelligence levels.

Tector:  That the Slayer?
Lyle:  Yep.
Tector:  Ain’t that Angelus with her?
Lyle:  Yep.
Tector:  Well, how come she ain’t slayin’? And how come he’s about to make me blush?
Lyle:  Well, I don’t know, Tector. And how come you’s always askin’ me so many stupid questions?
Tector:  So, you wanna take him, or, uh, you want me to, Lyle?
Lyle:  I say we leave it. Wait till she’s alone.
Tector:  Why? You scared?
Lyle:  Nope. I could whip ’em both right now if I wanted to.
Tector:  Then why don’t ya?
Lyle:  ‘Cause I got me a plan. I’m the one that does the thinkin’, ‘member?
Tector:  Yeah. You do the thinkin’, Lyle. That is definitely your department. So why don’t you tell me again why we can’t kill ’em now?

Jonathan makes a brief appearance in this episode, but Oz and Jenny are noticeably absent, as well as Principal Snyder (shouldn’t he be the one spinning the cover story?). But the whole egg parenting was cute:

Xander:  Well, you know, it’s the whole ‘sex leads to responsibility’ thing, which I personally don’t get. You gotta take care of the egg. It’s a baby. You gotta keep it safe and teach it Christian values.
Willow:  My egg is Jewish.
Xander:  Then teach it that Dreidel song.

While some of the visual effects of this episode’s creature were a bit laughable, the thing that jumps out at Buffy was definitely creepy.

Xander:  Can I just say Gyughhh!
Buffy:  I see your ‘Gyughhh!’ and raise you a Nyaghhh!

Can you think of a typical high school experience that didn’t get a supernatural makeover on Buffy, but you wish it had?