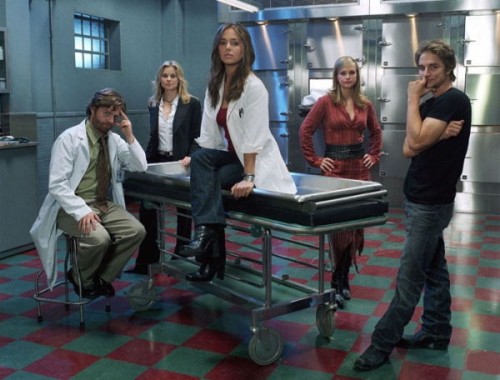 I began watching this show for two reasons: Matt Bomer and Eliza Dushku. I’d heard the two were reuniting in an upcoming episode of White Collar (which aired earlier this week and was awesome), so I figured it was time I checked out this “canceled before its time” show.

I wasn’t all that impressed with the first few episodes. Dushku’s portrayal of Tru didn’t seem all that different from her portrayal of Faith on her early Buffy the Vampire Slayer days, and the other Davies siblings were annoying. Zach Galifianakis wasn’t as funny as I’d anticipated, and it took a while for Matt Bomer to show up in more than a scene or two. The show quickly fell into a formula – the first 10-15 minutes was the original day, and the rest of the show was Tru reliving the day and trying to save the victim.

I was kind of seeing why the show got canceled.

Then things started to change. Episodes delved deeper. Writers played with the formula. Bland characters gained added complexity. Harrison and Davis found out about Tru’s ability and helped her out. People closer to Tru – both friends and enemies – were put in danger. The mythology behind the show expanded, and a villain began to emerge.

And now, with ten episodes left, I’m starting to get attached to Tru Calling.

I still wish Eliza Dushku had decided to take the Faith spinoff show instead of doing this one, for several reasons. One, knowing this show only got 26 episodes. Who knows how long “Faith the Vampire Slayer” would have run? Two, because Joss Whedon pretty much makes anything better. Three, if the spinoff was a hit, it would have helped things out with Angel, especially if there were crossovers, and perhaps Angel wouldn’t have been canceled.

And is it just me, or do the intro credits seem to have a lot in common with the Dollhouse credits? Plus the graphics for the day rewinding remind me of the memory wipes on Dollhouse.