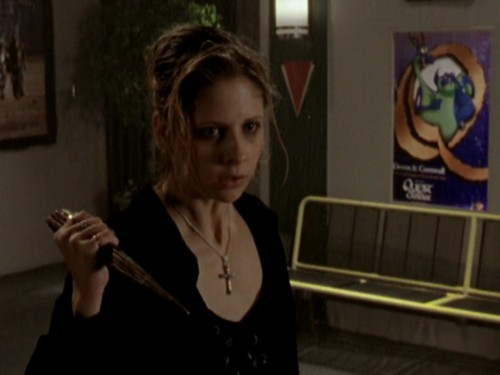 Or rather the loss of it.

This is easily one of the most heartbreaking episodes of the show. Angel is gone; Angelus is back – and yearning for a good kill. And to break Buffy’s heart in the process.

Buffy goes from waking up alone, to worrying when Angel doesn’t contact her, to reeling from his cruel words, to realizing he’s now a soulless monster, to finding she’s the reason he lost his soul. All in about 36 hours.

(Quick sidebar here on a couple Angel vs. Spike soul issues. I’ve read several posts and comments wondering why Angel didn’t just go through the demon trials to get his soul back – he wouldn’t have to deal with this annoying curse and he and Buffy could be together. The main reason? Soulless Angel – Angelus – doesn’t want a soul. Angelus would probably be willing to go through the trials just to KEEP from getting his soul back. Look how hard he tries to prevent in later episodes of this season and in season four of Angel. Spike wanted a soul. That’s why he was willing to fight for it. And one brilliant post I read talked about why Spike got such blind devotion from Buffy in season 7. Love for Buffy had cost one vampire his soul, and that “I am poison” mentality echoed through Buffy’s relationships thereafter. But Spike’s actions changed that. Now, love for Buffy had caused a vampire to get his soul back.)

It’s surprising how many of the significant moments in this episode and the previous one involve water. Angel jumping in to save Buffy at the dock. Their escape from the factory (and what follows). Angel stumbling outside in the rain just before his soul leaves him. Their fight as water pours from the sprinkler system at the mall.

With the Slayer an emotional wreck, it’s up to the others to figure out how to save the day. And Xander comes through brilliantly:

Giles:  And we’re absolutely certain that, that Angel has reverted to his former self?
Xander:  Yeah, uh, we’re all certain. Anyone not feeling certain here?
Willow:  Giles, you wouldn’t have believed him. He was so… He came here to kill us.
Cordelia:  What are we gonna do?
Giles:  I’m leaning towards blind panic myself.

Cordelia:  This is great. There’s an unkillable demon in town, Angel’s joined his team, the Slayer is a basket case… I’d say we’ve hit bottom.
Xander:  I have a plan.
Cordelia:  Oh, no, here’s a lower place.

Willow also has a significant emotional journey in this episode, from finding out that Xander and Cordelia are together to gaining new respect for Oz.

Xander:  Willow, we were just kissing. It doesn’t mean that much.
Willow:  No. It just means that you’d rather be with someone you hate than be with me.

Oz:  So, do you guys steal weapons from the Army a lot?
Willow:  Well, we don’t have cable, so we have to make our own fun.

One thing that bugged me about this episode was that Spike was all fine with destroying the world, but by the season’s end he’s against it. Yes, it did seem to be more Drusilla’s plan while he was along for the ride, but it’s a little odd that his perspective would switch like that. Of course, the Judge’s version of the end of the world might have been nicer that Acathla’s. Or deep down, Spike knew that Buffy would stop the Judge (she’d always managed to pull out a win before). Or sitting around in a wheelchair for half a season gave Spike time to think of what things would really be like if the world ended. Or both times, it was all about Dru.

Spike:  Are we feeling better, then?
Drusilla:  I’m naming all the stars.
Spike:  You can’t see the stars, love. That’s the ceiling. Also, it’s day.
Drusilla:  I can see them. But I’ve named them all the same name. And there’s terrible confusion.

I think it was genius for the network to use this two-part episode, aired on consecutive days, to transition the show from Mondays to Tuesdays. (Hmm, looked it up to double check – yep, the show stayed in its Tuesday 8PM slot for the rest of its run. That’s when I watch NCIS now, which debuted the year after Buffy the Vampire Slayer ended. And when the show moved to UPN, guess what the WB replaced it with? Gilmore Girls. To think of all the drama I missed because I didn’t start watching live TV until 2009.)

I was surprised (and pleased) to see how strongly Giles was on Buffy’s side, even when it meant turning against Jenny after she hid her past and motives for being there. (To be fair, she was pretty harsh to Giles after he hid his past.) It’s a little sad, knowing that she’d still be alive if Buffy had been able to kill Angel at the end of this episode. But the implications would be farther reaching that just that. If he’d been dusted as Angelus, would he have still been brought back somehow? It’s never mentioned that the First or the Powers That Be could do that, but it doesn’t seem out of their scope. And of course Wolfram and Hart brought back Darla, so they would have had both the means and the motivation (wanting him to fulfill prophecy) to bring back Angel, and if they used the same method, he would have come back as a human, which would have created a whole different set of issues.

Wow, this post went off on an awful lot of tangents – hope you don’t mind!

The closing song of this episode always makes me tear up a little. I have it on my iPod just so I can play it when I want to feel sad or am already feeling sad (the same with “Goodbye to You” and “Close Your Eyes”). I’ve heard complaints that the song doesn’t really fit in with the rest of the show, but just read the lyrics. They’re absolutely perfect for this episode (especially the last line):