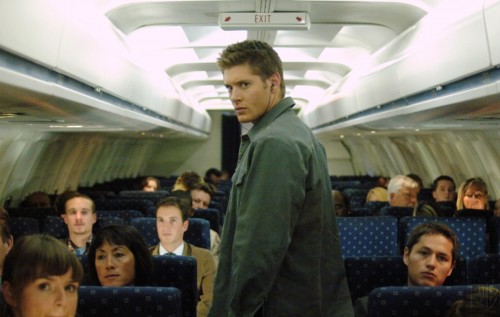 This episode finally sets up the “why” for future episodes. If Dean and Sam aren’t going to be following a trail of otherworldly clues to find their dad, they need to have a reason for coming across all of these supernatural baddies. Since word likely got passed around that John Winchester’s number was the one to call when dealing with paranormal events, having his voicemail message refer people to Dean’s cell is a good way for the brothers to find out about “jobs” in the future.

“Phantom Traveler” was interesting but not amazing. Jaime Ray Newman, whom I’ve most recently seen in season three of Veronica Mars, guest stars in the episode and gives a decent but unremarkable performance. I think the episode gave too much away at the beginning with showing how the plane went down – figuring out the why is what causes viewers to be glued to seats. Sometimes it works to have the audience know more than the main characters as it creates tension; here it doesn’t. It just makes Dean and Sam look slow for not figuring it out sooner (when in reality, they figured things out almost too quickly).

The one part I did enjoy about this episode was Dean’s fear of flying. Having a character that faces off against demons and ghosts without breaking into a sweat get all panicked about stepping onto a plane was a great stroke.

This season is beginning to remind me of  season one of Angel, but it’s only a murky reflection. While many shows have a “baddie of the week” premise (from speculative shows with actual monsters to crime drama with murderers to catch), what keeps viewers watching is the team dynamics as they solve things. Limiting the team to only two members strips away most of the potential dynamics, but a show can pull it off if the two characters sizzle together. Sam and Dean don’t. They don’t even have an explosive secret to up the tension.

Another way this show pales in comparison to Angel (and most other shows) is the tiny amount of a long-term story arc. Yes, they want to find their dad. Yes, they want to find the thing that killed their mom and Jess. But that’s it, and those quests get far too little screen time. And there doesn’t seem to be any sort of plan toward finding either of those – just a whole lot of wandering and maybes. So frankly, I’m getting a little bored.